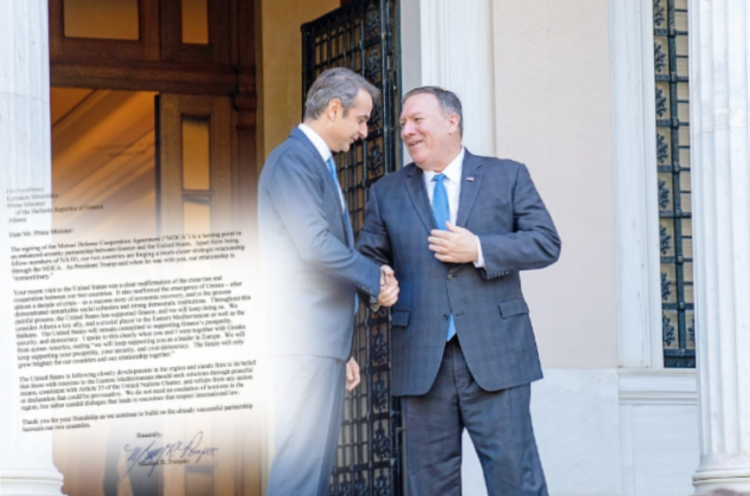 US Secretary of State Mike Pompeo sent a letter to Greek Prime Minister Kyriakos Mitsotakis on Tuesday morning, where he expresses strong and unequivocal American support for Greece’s prosperity and security.
This is a rare diplomatic move, since the last time a US Secretary of State sent a letter to a Greek Premier was more than four decades ago, during the tenure of Henry Kissinger.
The letter is in a very friendly tone, highlighting the unprecedented friendship of the two nations in many vital sectors of policy today.
”The signing of the Mutual Defense Cooperation Agreement (“MDCA”) is a turning point in an enhanced security partnership between Greece and the United States. Apart from being fellow members of NATO, our two countries are forging a much closer strategic relationship through the MDCA,” Pompeo noted.
”As President Trump said when he was with you, our relationship is “extraordinary,” he stated.
Secretary Pompeo went on to say that Prime Minister Mitsotakis’ recent visit to the US reaffirmed the close ties and cooperation between the two countries.
”It also reaffirmed the emergence of Greece – after almost a decade of crisis – as a success story of economic recovery, and in the process demonstrated remarkable social cohesion and strong democratic institutions,” Pompeo said.
Expressing a strong message of support, Pompeo stated that ”the United States has supported Greece, and we will keep doing so. We consider Athens a key ally, and a crucial player in the Eastern Mediterranean as well as the Balkans. The United States will remain committed to supporting Greece’s prosperity, security, and democracy.”
Pompeo also reminded the Premier of his remarks made during Mitsotakis’ recent visit to Washington.
”I spoke to this clearly when you and I were together with Greeks from across America, stating “we will keep supporting you as a leader in Europe… The future will only grow brighter for our countries and our relationship together.”
In an indirect message regarding Ankara’s behavior in the region, Pompeo was guarded and careful, but clear.
”The United States is following closely developments in the region and stands firm in its belief that those with interests in the Eastern Mediterranean should seek solutions through peaceful means, consistent with Article 33 of the United Nations Charter, and refrain from any action or declaration that could be provocative,” the chief of American diplomacy said.
”We do not need an escalation of tensions in the region, but rather candid dialogue that leads to outcomes that respect international law,” the Secretary stated.
This unusual letter is seen by the Greek government as another sign of America’s strong interest in the region, and Washington’s desire to see the Eastern Mediterranean as a region of cooperation and economic growth rather than as a place of rising tensions and national antagonisms.