Cyprus Denounces Turkey as a Pirate State Over Illegal Drilling 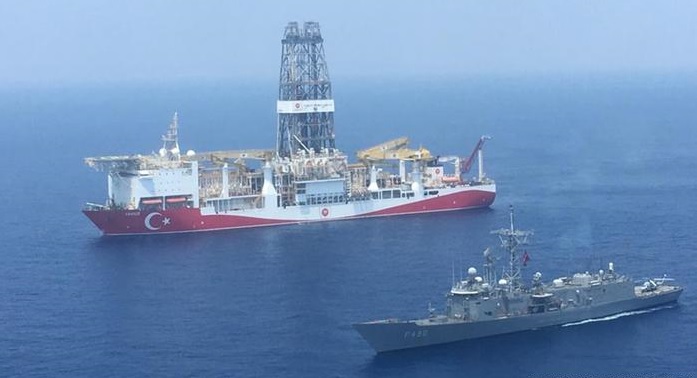 Cyprus called Turkey a ”pirate state” on Sunday after Ankara announced that the Turkish research vessel ”Yavuz” will soon conduct a new series of hydrocarbon research and drillings south of the island.
The spokesman of the Foreign Ministry of Turkey Hami Aksoy announced that the Turkish vessel arrived at the broader area south of Cyprus, where it will conduct its third attempt to drill in an area that’s already licensed to energy companies Eni of Italy and Total of France.
This would be Turkey’s fourth such drilling effort since last July when it dispatched a pair or warship-escorted drill ships to the island’s west and east. It would also mark the second time a Turkish ship was drilling in a block licensed to Eni and Total.
The Government of the Republic of Cyprus condemned Turkey’s newly planned illegal drilling within the Exclusive Economic Zone and continental shelf of the country.
In a statement issued Sunday, the Presidency of the Republic pointed out that Turkey provocatively ignores the repeated calls by the international community and the European Union, to terminate its illegal activities in Cyprus’ EEZ.
”It is now attempting to carry out new illegal drilling in the southern EEZ/continental shelf of Cyprus, inside exploration block 8, which was duly licensed to the European companies ENI and TOTAL; this new attempted drilling constitutes yet another flagrant violation of the sovereign rights and jurisdiction of the Republic of Cyprus under the UN Convention on the Law of the Sea,” the Cypriot Presidency noted.
Greece’s foreign ministry said in a statement Sunday that Turkey’s latest action comes on top of numerous violations of international law in the wider region that aim “to serve expansionist aspirations.”
The ministry said in a statement that such breaches of international law won’t be made legal no matter how many times they’re repeated.

The Hellenic-American Chamber of Commerce will sponsor the first virtual tour of the Acropolis Museum, to take place on April 10 at 11 AM EST.
Ancient Greece