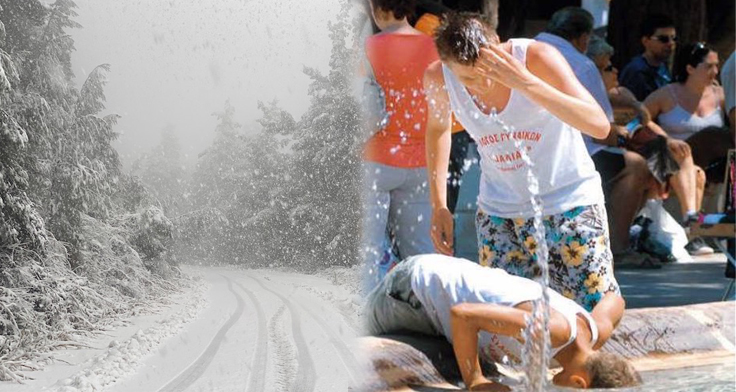 The National Observatory of Athens’ ”Meteo” service revealed on Friday the weather extremes and records of 2019 from the Greece’s dozens of meteorological stations.
2019 was a year of surprises since many abnormalities were recorded.
The most striking one was that instead of Northern Greece receiving the largest amounts of rain as it is the norm, it was the southern country that experienced the heaviest rainfalls throughout the year.
Surprisingly, the county of Chania on Crete was the country’s region with the highest amount of rain, while the capital of Macedonia, Thessaloniki received less rain than Athens and the Cyclades!
According to Meteo’s data, the village of Asi Gonia in Chania, Crete was Greece’s settlement that received the highest amount of rain in the country.
2,896mm of rain fell in Asi Gonia, with the village of Sembronas, again in Chania, receiving 2,780mm.
The least rainfall was recorded in Cordellio, Thessaloniki with just 332mm, and in Kalamaria, Thessaloniki with 392mm.
The highest temperature to be recorded in 2019 was 41.9°C, and it was reported in the village of Chalki in Larissa, Thessaly on July 8.
The lowest temperature was recorded in Neos Kaukasos of Florina, West Macedonia on January 6, 2019.
The temperature recorded there was a freezing -22.5°C, with the second coldest temperature for 2019 being recorded in Nevrokopi, Drama.
There, the temperature that was recorded on January 8, 2019 was -20.9°C.
A total of thirteen major storms hit Greece in 2019, and the authorities have dubbed them with the following names: Rafael, Sofia, Telemachus, Hypatia, Phoebus, Chione, Oceanis, Antinous, Victoria, Geryon, Dido, Eteocles, and Zenobia.
Meteorologists give names to major storms, as this practice is proven to make the public more aware of a potentially dangerous weather phenomenon.