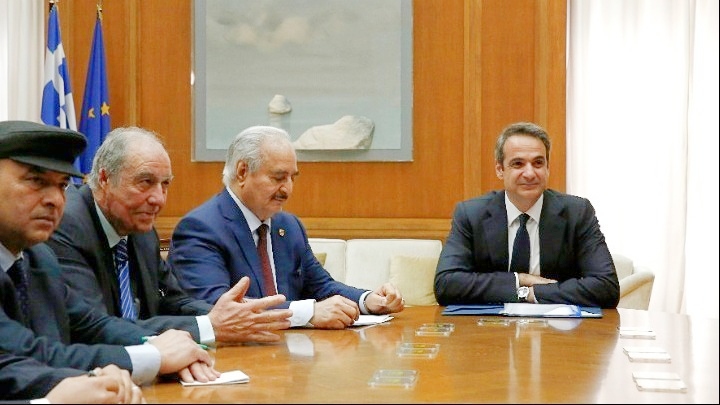 The commander of rebel forces in war-torn Libya, General Khalifa Haftar, met Greek Prime Minister Kyriakos Mitsotakis in Athens today in a bid to counter Turkish support for his opponents.
The surprise visit by Haftar takes place ahead of a weekend summit in Berlin aimed at halting the conflict in oil-rich Libya, in which the warring sides are competing for international support.
Turkey, which has promised to send troops to back Libya’s recognized government against Haftar, has signed a controversial maritime boundary deal with Tripoli, which Greece says encroaches on its sovereign rights.
Earlier on Friday, Greek Foreign Minister Nikos Dendias told General Haftar to be constructive during the upcoming summit to try to end the war over Tripoli.
Talking to reporters, Dendias said “We encouraged the commander to take part with a constructive spirit in Berlin’s procedure and try… to achieve a ceasefire and the restoration of safety in Libya.”
Prime Minister Mitsotakis, who was not invited to the summit in Berlin, has warned that Greece will use its veto powers as a European Union member to try to block a Libyan agreement unless Turkey’s recent maritime deal is declared null and void.
Meeting with Mitsotakis
The meeting between Libyan National Army Commander Haftar and Prime Minister Mitsotakis took place on Friday afternoon local time.
“We are pacifists. We have come here to talk about peace,” General Haftar said as he arrived for his meeting with Mitsotakis, which took place in the prime minister’s offices in the Greek Parliament.
The two delegations did not make any formal statement after their meeting.
However, the Greek side issued a non-paper informing reporters about what was discussed during the crucial meeting.
According to this document, the Libyan Commander pledged to go ahead with the delimitation of Libya’s maritime zones with Greece, and he also denounced Turkey’s negative interventionist role in the region.
Commander Haftar also said that the two deals signed between the Tripoli-based government and Turkey are void, not only because they violate international law, but also because they were signed by a government that does not have the legal authority to do so.
On his behalf, Prime Minister Mitsotakis asked Haftar to show a constructive spirit while attending the upcoming Berlin talks.
The surprising move by Greece to hold such a crucial meeting just a few hours before the Berlin meeting, where Germany denied to invite the country, is seen as a bold move by Athens, attempting to show to everyone concerned that Greece has strong interests in the region and is not willing to step aside.
This, along with Mitsotakis’ clear warning that Greece will not accept any agreement at a European level if the illegal Turkish-Libyan deal is not voided, shows that Athens is determined to pursue its interests by any means available.