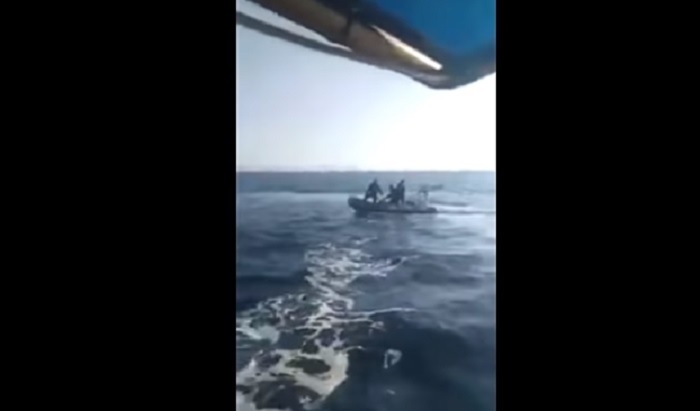 A new video emerged on Wednesday of a confrontation between the Turkish Coast Guard and Greek fishermen near the islet of Imia, whose sovereignty is disputed by Ankara.
In the video, Turkish officers are seen approaching the fishing vessel on an inflatable dinghy, shouting at the fishermen to leave the area. The Greek fishermen on board refuse to move, shouting back that “this is Greece, not Turkey.”
At one point during the standoff, the fishermen panic and warn each other that someone on board the Turkish vessel has produced a gun.
It is not yet known when the video was shot. The fishermen on board claim that it occurred west of Imia.


A similar incident occurred in late December when two Turkish Coast Guard vessels harassed a Greek fishing boat.
At that time, Nikos Lagadianos, the press spokesman for the Greek Coast Guard, speaking to Greek Reporter, said that “Such incidents are very common during this period of the year as it’s the fishing season for sea bream.”

Greek Fishermen have been complaining for years about the Turkish Coast Guard harassing them in the Aegean, but this time they caught them on camera almost crashing their boat, in an attempt to destroy their fishing equipment and make them abandon their position. Full story and video: https://bit.ly/37odmxl

Turkey has recently been sharply escalating its provocations against Greece in the Aegean.
According to data provided by the Hellenic National Defense General Staff, the number of violations of the country’s national waters by Turkish Navy warships has been steadily increasing since 2010.
The number of such violations in 2010 was 133. In 2015 the number had increased to 299 and in 2019 it reached the staggering figure of 2,032.
A large number of Turkish violations had been recorded in 2018 as well, but the major provocation that year was when a Turkish Coast Guard vessel rammed a Greek Coast Guard boat at Imia.