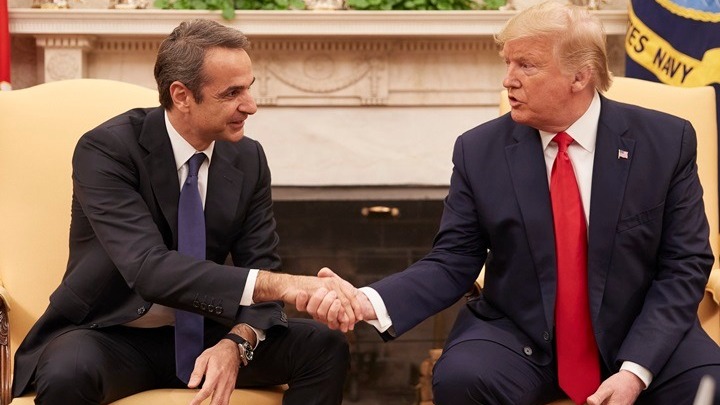 The meeting between Greek Prime Minister Kyriakos Mitsotakis and U.S. President Donald Trump at the White House on Tuesday has left many Greeks uncertain whether the much-advertised event will be beneficial for Greece in regard to Turkey’s recent continuous provocations.
The current hostilities between the U.S. and Iran appeared to be a bonafide opportunity for the Greek PM to offer his full support for a possible confrontation — and receive similar support in turn against Turkey‘s territorial claims.
Iran has already launched missile attacks against American bases in Iraq.
Yet the Greek leader seems to have failed to take advantage of the Iran crisis and obtain full U.S. support against Ankara’s continued expansionist actions.
In the event that the United States and Iran do engage in open military conflict, Greece’s crucial strategic role in NATO, and the important U.S. and NATO naval facilities at Souda Bay on Crete, could be a great tool in shifting Trump’s seeming tolerance towards Recep Tayyip Erdogan’s expansionist aims.
Souda Bay is the largest and most prominent naval base for the Unites States and NATO in the entire Eastern Mediterranean. It features the only deepwater port in Southern Europe and the Mediterranean, making it suitable for maintaining the largest aircraft carriers.
In October, the Mitsotakis government agreed to a set of amendments to the existing 1990 Mutual Defense Cooperation Agreement (MDCA) which would allow the U.S. to expand the Souda Bay naval facility and establish even more bases in Greece. This way, Greece would support even larger U.S. and NATO operations in the Mediterranean and Middle East.
Leveraging this agreement on expanding the presence of U.S. military bases in Greece, Mitsotakis could have used the Iran card to ask Trump to explicitly condemn the Turkey-Libya agreement on maritime boundaries, which Athens sees as illegal and destabilizing.
The Greek premier did ask for a condemnation during yesterday’s question period with the press. However, Trump refrained from answering, and there seemed to have been no use of the agreement to forward Mitsotakis’ position.
Perhaps Mitsotakis should have insisted. He could have stressed the importance of being a trusted U.S. ally during a time when there is general disapproval for the killing of Qasem Soleimani by the U.S. Army and the condemnation of the escalation of war rhetoric from Trump.
He could have stressed that Erdogan has called the Soleimani killing an “assassination” and not an act of self-defense, as Trump has insisted it was.
Also, Mitsotakis did not exactly speak of Greece’s military support in case the two countries go to war.  His statement “We’re allies with the U.S., and we stand by our allies,” was not binding but rather just more diplomatic talk. After all, the Tehran government has already announced that any country which supported the United States in case of war would be attacked by Iran as well.
But seen through a different lens, the Iran crisis could actually mean that the timing for Mitsotakis was unfavorable. At this very moment, Trump’s mind is more on what to do with Iran and how to handle the issue of the impeachment drama. So Turkey’s deal with Libya on maritime borders would most likely be the last thing on his mind at the present moment.
Also, one should keep in mind that Turkey is surely moving away from the West. So it would be too optimistic for Athens to believe that any diplomatic talk coming from the U.S. would deter Erdogan from causing trouble in the Eastern Mediterranean anyway.
However, President Trump’s signing of the Eastern Mediterranean bill into law on December 20, which recognizes significant U.S. security interests in the Eastern Mediterranean, and the upgrade of the Mutual Defense Cooperation Agreement that Secretary of State Mike Pompeo signed in Athens in October, are both acts that show that Greece is very likely to get the support it needs from Washington against Turkey’s provocations.
No matter what the unpredictable American President refrained from saying yesterday.