TechNews
GreekReporter.com Greece Epiphany: From Thrace to Cyprus, Greeks Celebrate the Blessing of the Waters

Epiphany: From Thrace to Cyprus, Greeks Celebrate the Blessing of the Waters

By Nick Kampouris
January 6, 2020
Facebook
Twitter
WhatsApp
Linkedin
Email
The Christian feast of the Epiphany was commemorated across Greece, Cyprus and all the world’s Greek Orthodox communities on Monday, January 6th, with particular gusto and celebration.
This year, Greece found itself covered in frost and snow, but all the annual Feast Day celebrations, including diving for the cross, were still held, with thousands of brave boys and men diving into the country’s freezing seas, lakes and rivers to try to retrieve the holy cross from the waters.
Thousands of Greek citizens attended liturgies in Greek Orthodox churches, and then followed the processions to the Blessing of the Water ceremonies, either by foot or car, which are traditionally held in ports, lakes or rivers, depending on the location of each parish.

Despite the freezing temperatures that the storm ”Hephaestion” brought to the country, thousands of men and boys plunged into the cold waters to commemorate Jesus‘ entering into the waters of the Jordan River, where he was baptized by his cousin John.
According to Greek tradition, the person who manages to swim the fastest and retrieve the cross that the priest threw into the water will have the blessing of good luck for the rest of the year.
Prokopios Pavlopoulos, the President of the Hellenic Republic, attended the Epiphany Day celebrations in Piraeus, Attica.
The President sent a message in defense of the values of democracy, solidarity and justice in an address to the assembled crowd. 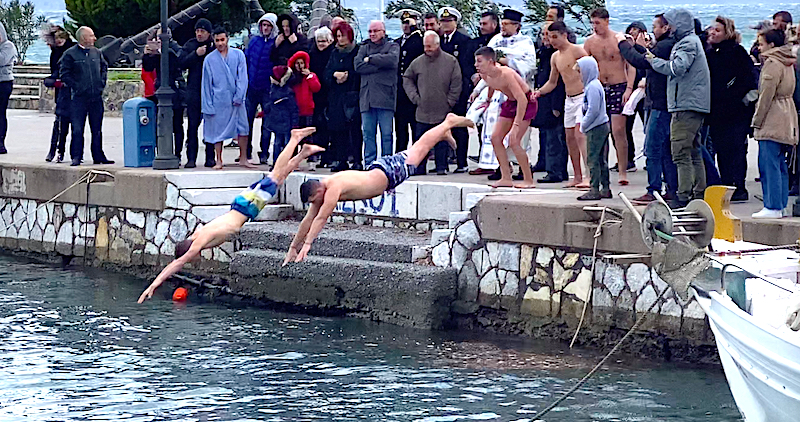 Boys dive into the freezing waters of North Euboea on the Feast of Epiphany, 2020
Prime Minister Kyriakos Mitsotakis is currently in the United States, ahead of his upcoming meeting this week with American President Donald Trump.
While there, Mitsotakis will attend the world’s largest Epiphany celebration, which will take place in the Greek enclave of Tarpon Springs, Florida.