TechNews
GreekReporter.com Greece The Benizelos Mansion: The Oldest Athenian House Which is Now a Museum

The Benizelos Mansion: The Oldest Athenian House Which is Now a Museum

For centuries Athens has been home to spectacular monuments that date all the way back to the peak of Ancient Greek civilization.
The Parthenon, as well as tens of other ancient monuments, can be seen around the Greek capital.
However, the oldest modern building in the city dates back to the 16th century, and it is now a popular museum.
Located at the historic neighborhood of Plaka, the ”Benizelos Mansion” or the ”House of Saint Philothei”, is the oldest surviving house of Athens.
Built at the beginning of the 1500s and renovated at the end of the 1600s, it is a typical two-storied mansion characteristic of the period of Ottoman occupation of Greece.
The building has a beautiful hagiati, which is a roofed verandah, on the floor, arches on the ground floor, and an interior garden with a well, a spring and a traditional olive press. 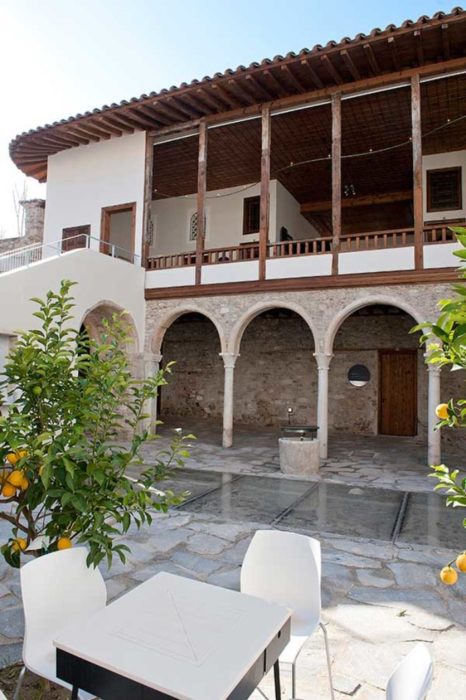 Athens undoubtedly had several houses of this type in the second half of the 17th century since there are paintings from this era depicting several homes similar to this one.
The 18th century mansion was erected over two earlier stone-built structures which were incorporated into the ground floor of the later building.
Tradition associates them with the house of Saint Philothei (1545 – 1589), who was a descendant of the noble Athenian family of Benizelos.
The building was taken over by the Greek Ministry of Culture in 1972, and in 1999 it was granted to the Greek Orthodox Archdiocese of Athens.
The structure was then restored and transformed into a museum using funds granted by the European Union.
People can visit the museum and learn about the story of the Benizelos family and Saint Filothei and learn about the lives and traditions of the Athenian aristocracy before the revolution against the Ottoman Empire in 1821.