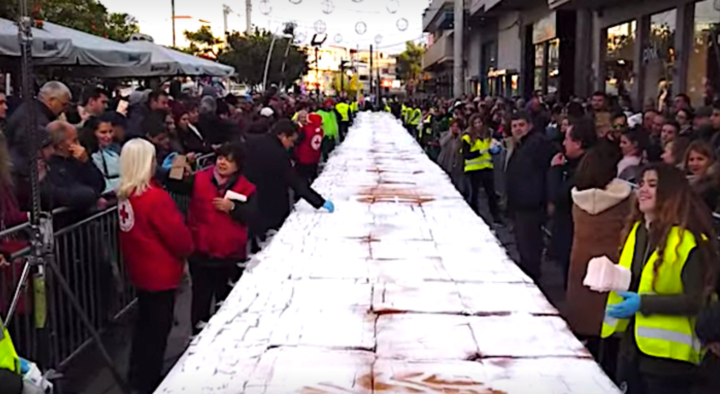 The Association of Bakers of Athens, together with citizens from Attica’s large municipality of Peristeri, prepared, baked and distributed to the public a massive ”Vasilopita,” the traditional cake Greek families enjoy on New Year’s Eve, on Tuesday.
Peristeri mayor Andreas Pahatourides had the honor of cutting several pieces from this massive cake in front of thousands of people who had gathered in central Peristeri to see the spectacle and try to get a taste of the delicious orange-flavored cake.
Thirty different high street bakeries in Athens baked all the individual cakes, which were then assembled together into one gigantic confection to celebrate the feast day of St. Basil on January 1.
This year’s Vasilopita was divided into 35,000 slices, which were then distributed to the members of the public in Peristeri.
The pieces had a total of 200 coins inside them, which are called ”Flouri” according to the tradition which began in the time of Saint Basil many centuries ago, in the early years of Christendom.
The fortunate people who found a flouri inside their piece of cake won a present and will be able to boast for the rest of the year that they were the lucky recipient of a St. Basil’s Day coin.
For the preparation of the cake, the Athenian bakers used 1,950kg (4,299 pounds) of pastry flour, 670kg (1477 pounds) of sugar, 730 eggs, 980 oranges, 630kg (1389 pounds) of yoghurt, 210kg (463 pounds) of baking soda, 90kg (198 pounds) of baking powder,  65kg (143 pounds) of sunflower oil, 900kg (1984 pounds) of margarine, 93 liters of brandy and 2.5 boxes of vanilla!