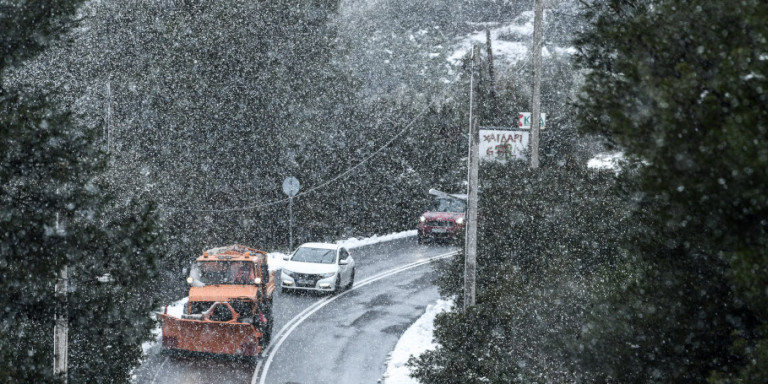 Several villages in central Greece were left without electricity on Monday as a result of heavy snowfall brought by the storm  “Zinovia” which had battered the country since the beginning of the weekend.
Public Power Corporation crews were busy trying to restore power to villages near Thiva. The municipal authorities there warned residents, and motorists in particular, to restrict their movements outdoors unless absolutely necessary, warning that roads were icy and conditions are expected to worsen over the course of the day.


According to the state-run Athens-Macedonian News Agency, the use of snow chains is necessary in several parts of the region of Viotia, and especially on roads the slopes of Mount Parnassus.
The island of Evia was also struggling with the heavy snowfall on Monday, with roads icing up not only between Halkida and Edipsos, but also in the region of Fokida, particularly to the west.
The Hellenic National Meteorological Service warned late on Sunday of a further worsening of weather conditions in Attica, Viotia, Fthiotida, Evia, Magnisia and the Sporades islands, where snowfall is expected even in areas located in relatively low altitudes.
The huge low pressure front has already moved off toward the Dodecanese islands and Crete, where it is expected to intensify and bring heavy rain, while also affecting the eastern Cyclades archipelago and the more southerly eastern Aegean islands.
Snow is also forecast to fall in the mountains of these islands, especially on Crete.
Ferry departures have been completely prohibited from all the ports in Attica due to the gale-force northerly winds. Most other major ferry services across Greece have also been affected by the severe weather from this storm.