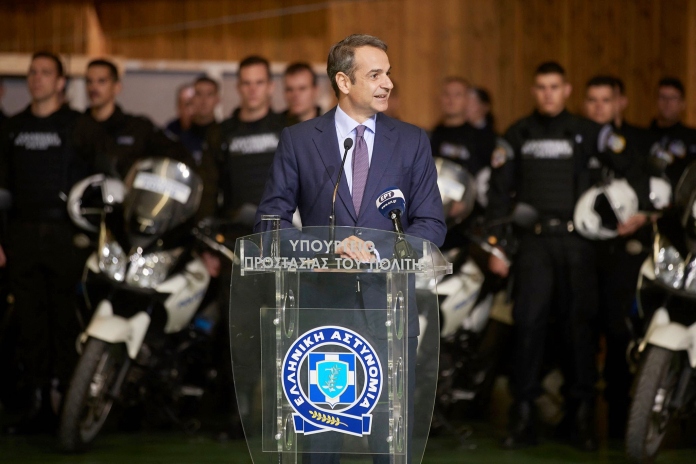 Greek Prime Minister Kyriakos Mitsotakis, accompanied by Citizen’s Protection Minister Michael Chrysochoides, presented the new ”DIAS” police unit on Monday in Athens, pledging more security on the streets of Athens and in Greece overall.
”DIAS” is an already-existing motorcycle unit of the Greek police which operates in big cities around the nation.
One of the main pre-election pledges of Greece’s new conservative government was that it would immediately hire and train 1,500 new officers to be added to the DIAS unit.
Prime Minister Mitsotakis presented the new team, which is comprised of 1350 individuals who will work for DIAS and 150 others who will comprise a unit of pedestrian police officers tasked with patrolling large cities.

Nine hundred and twenty of the new men and women will conclude their fast-track training on January 17, 2020, while the rest have already concluded their training and are already working in the field.
Greek police forces are currently undergoing a major facelift, as 450 new vehicles have been put into service and an additional 700 are expected to be added very soon. Additionally, officers are receiving new bulletproof vests and helmets as well as high-tech communication devices.
”The police officer must be on the street, not at the offices,” Prime Minister Mitsotakis declared during his address on Monday.
The New Democracy government has made the issue of domestic crime and security one of its priorities, accusing the previous left-wing SYRIZA government of not assisting the police in helping it do its job.
However, repeated incidents of police brutality in the last several months have raised questions about whether the government’s pro-police rhetoric eases tensions or actually makes the country’s streets more susceptible to incidents of vandalism and low-level criminal activity.