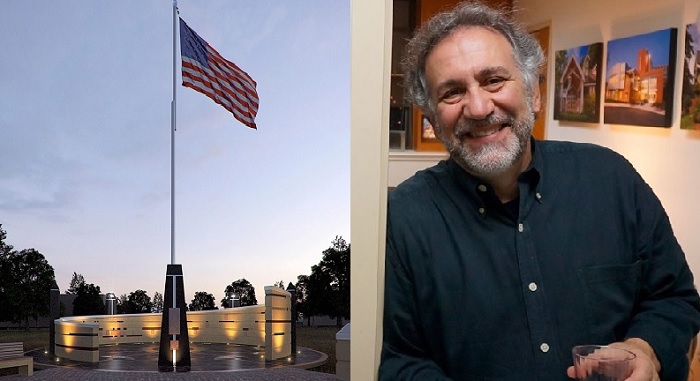 It is a thematic monument designed to recount the history of the United States in 25-year increments, beginning with its Declaration of Independence in 1776 and continuing through our times.

Vasilion, a second-generation Greek-American, speaking to Greek Reporter said that the inspiration for the project was sparked by a conversation with a long-time client, who wished to create a monument for Bernard Cigrand.

The dentist, who was from Batavia, Illinois, held what is believed to be the first recognized celebration of Flag Day in 1885, and began a lifelong quest to establish it as a formal holiday throughout the nation.

“I wanted to create a dynamic monument that tells a story of the American nation — not a mausoleum that honors just one man that lived a century and half ago,” Vasilion explains.

“It’s not a war memorial. It is designed to honor the American flag,” he adds.

After several initial sketches, he came up the final version of his proposed Flag Day monument. The design features a 40-foot diameter helix-shaped structure with a base of dark granite and a 6-foot wide walkway around its perimeter. The flagpole, which towers at a height of 50 feet, will display a large 10-foot by 18-foot American flag.

The helix, Vasilion explains, reflects the steady population growth of the United States throughout the years. Plaques showing the growth of the nation will be spaced at intervals around the helix. The lowest part of the helix reflects its population of 2.6 million in 1776 and its walls rise steadily until its highest point, where another plaque showing the US’ most recent census population of 310.2 million is placed.

There are also several obelisks which commemorate iconic flag events, including Bernard J. Cigrand and the creation of Flag Day; Continental Congress’ establishment of the official US flag; and Betsy Ross, believed to be the seamstress who stitched the first American flag.

Other obelisks show Francis Scott Key and his writing of the Star Spangled Banner outside Fort McHenry; the raising of the flag at Iwo Jima in WWII and the placing of the Stars and Stripes on the moon.

The wide walkway around the perimeter of the monument will be called “The Ring of Honor.” Of the more than 3,500 service personnel who have received the Congressional Medal of Honor, 204 hailed from Illinois. Each one of them will be honored with a small plaque around the periphery of the ring.

Vasilion has designed the Monument so that there will also be adequate room to honor future recipients of the Medal.

The Greek-American architect says that he wanted the monument to have enough visual impact and meaning that schoolchildren, veterans’ associations and other groups could visit and learn from history. “In the end, a visitor will walk away with an appreciation for our flag, our nation, and the sacrifice that was made by so many for the freedom we enjoy today,” he says.

The Flag Day project is at the fundraising stage at present. Vasilion says that the cost upon completion may approach $800,000, but over $500,000 has been raised thus far for the ambitious monument, which is slated to be completed by next Flag Day, June 14, 2020.

He noted that fundraising plaques are available which can be purchased at very reasonable prices ($150, $300 and $500) to honor or memorialize any person or group and make them a permanent part of this important monument.

The architect shared with us that he will buy a plaque to commemorate his father, Dimitri Vasiliou, who once served in the U.S. Army and was a Korean War veteran.

Vasilion is justifiably proud of both his American and Greek heritage. His maternal relatives immigrated to the United States from the island of Crete, while his paternal family came from Athens and the island of Poros.