GRNews
GreekReporter.comGreeceData Shows More Tourists Came to Greece in 2019 But Stayed for... 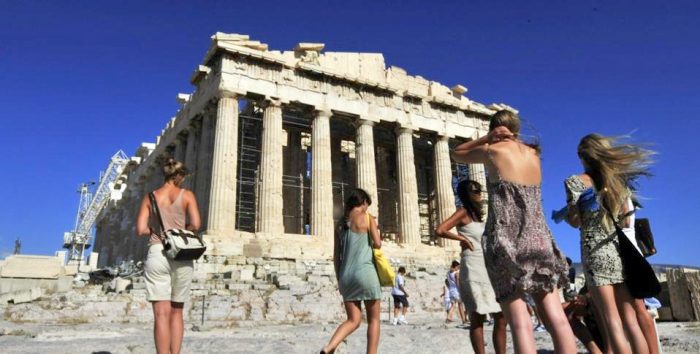 The Hellenic (Greek) Statistical Authority (ELSTAT) published new data on Friday regarding the number of tourists who visited Greece between January and September of 2019, revealing some interesting information about this year’s tourism trends.
In particular, ELSTAT’s data for the first nine months of 2019 showed that the number of arrivals amounted to 19,324,078, up by 18,991, compared to the 19,305,087 arrivals during the same period last year.
However, while overnight stays amounted to 80,966,575 in these nine months of 2019, this statistic showed a decrease of 645,947 overnight stays compared to 2018’s figures.
According to ELSTAT, the average number of nights spent per person in Greece remained unchanged compared to the corresponding period of 2018, as it amounted to 4.2 nights.
More specifically, the average number of nights spent was 4.8 nights for non-Greek nationals and 2.4 nights for Greek nationals.
The total occupancy of rooms in hotels and similar establishments (excluding tourist campsites), which is based on the nights spent compared to total rooms available, amounted to 55.4 percent during the period of January to September, 2019.
This compares to the 57.4 percent room occupancy recorded throughout Greece for the corresponding period of 2018.