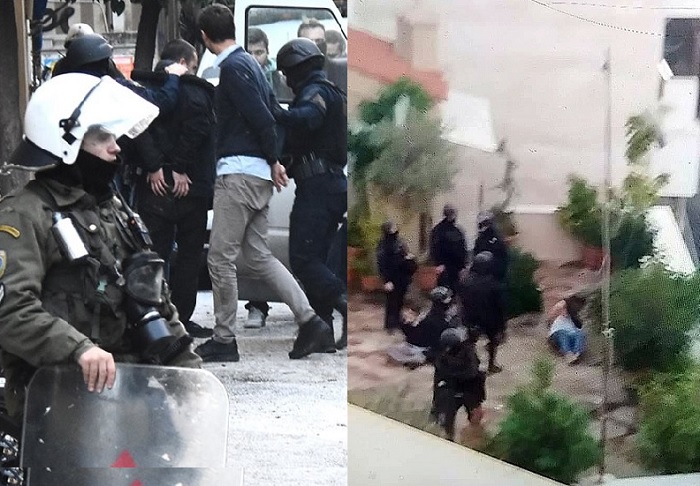 Greek police were accused of using excessive and even illegal force against citizens during their operation on Wednesday morning to clear three anarchist-occupied squats in central Athens.
A family living next door to a squat in the district of Koukaki said that riot police handcuffed the father and sonand made them sit on the terrace of the property after they asked officers for proof of a search warrant.

According to the wife and mother, who spoke to Antenna TV on condition of anonymity, the riot police knocked on their door early in the morning requesting passage through their ceiling and roof to the squat next door.
The father of the family asked the officers whether they had a search warrant and said that he would willingly let them through if they produced one.
“We were standing at the windows and watching what was happening. At some point we heard footsteps on the terrace and my husband and my son went up to see what was going on. The riot police were on the roof and my husband asked them again whether they had a search warrant.
“In response they were beaten, and were tied on the terrace. I went upstairs to see what was going on and they threatened me. They told me to shut up and leave… I saw a riot policeman kneeling on my son’s head,” the woman said. 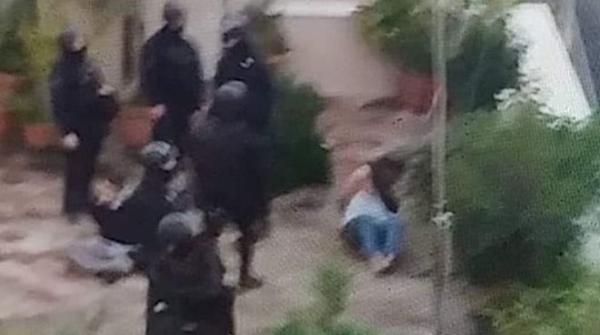 Police’s Statement on the Incident
Later on Wednesday, an announcement was issued by the Hellenic Police commenting on the incident.
The Greek Police Headquarters noted that everything happened in a legal manner with the presence of a prosecutor.
“Officers were attacked at first by one person and then by a second with stones, bricks, metal objects, paints and fire extinguishers,” the police said, adding that ”After the police entered (the squat), these men tried to escape to a neighboring building, which, it turned out to be their home. There, a third person appeared, who attempted to take the gun of a policeman. Three people were stopped and were arrested on the terrace.” the statement claims.
Commenting on the photographs and videos which went viral on the internet, sparking a wide wave of condemnation against the police, the Headquarters noted that the images showing a man sitting on a rooftop with his handcuffs allegedly wearing something that looks like a hood, “is misleading” and that “there were no hoods, no female presence, and no unreasonable violence.”
The statement concluded that the information the police received from the raid inside the squat was important, and because of this, a press conference will follow soon.