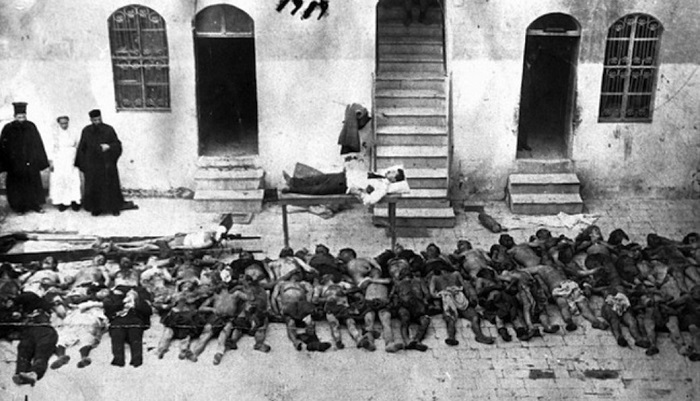 By Michael Goodyear*
In the final years of the Ottoman Empire, the Ottoman government under the Committee of Union and Progress (“CUP”) orchestrated massacres of its Christian minorities, resulting in ethnic cleansing that would lead to the deaths of hundreds of thousands and would later inspire the Holocaust.
Yet even after a century, the genocide of millions under the sword of the Ottoman Turk has been forgotten and unrecognized by most of the world. With the passage of Senate Resolution 150 on December 12, 2019, the United States Congress, over a hundred years after these atrocities, has finally recognized not only the Armenian Genocide, but the broader Ottoman extermination of its Christian minorities.
Ottoman Decline
The Ottoman Empire was centered on modern-day Turkey and included substantial numbers of Christian minorities that had lived in this land for millennia, dating back to the Byzantine and Roman Empires. While ethnic tensions were not infrequent in the diverse empire of the Ottomans, for the most part the history of the Ottoman Empire is one that is compared to the convivienca, or harmony between different religions in Moorish Spain.
This dynamic began to change as the Ottoman Empire’s steep decline began in earnest during the nineteenth century. Massacres on both sides took place during the wars of independence in the Balkan countries such as Greece and Serbia. By the end of the century, however, massacres began to take place not as part of war, but against the Ottoman Empire’s own Christian communities. Large scale Ottoman massacres of Armenian and Greek communities began during the late nineteenth and early twentieth centuries, with perhaps the most infamous being the Hamidian massacres of Armenians from 1894-1896, resulting in roughly 200,000 deaths. It was just a precursor of what was to come.
The Genocide
Prior to the First World War, the Ottoman Empire, in rapid decline, was headed by the Committee of Union and Progress (“CUP”). The CUP were, among other things, proponents of Turkish nationalism. When the Ottomans joined the Central Powers of Germany and Austria-Hungary in 1914, the stage was set for the first genocide of the twentieth century. Using Christian rebels colluding with the Russian army as a pretext, the Ottoman government announced a policy of property confiscation and deportations against the Christian minorities of the empire, first among them the Armenians.
Certainly no standard of international law would have allowed the Ottomans to justify the murder of millions on such a pretext.


The Ottomans began to deport and massacre Greek communities inside their borders as early as 1913, which expanded once World War I began. In 1915, the CUP launched ethnic cleansing campaigns against the Armenian and Chaldean communities under their rule. On April 24, 1915, the Ottomans rounded up leading Armenians in Istanbul and deported them eastward. In the following months, thousands of Armenians were slaughtered while others were forced from their homes and sent off to the Syrian Desert. Few actually made it. As Henry Morgenthau, Sr., the American Ambassador to the Ottoman Empire at the time stated, “The Turkish policy was that of extermination under the guise of deportation.” Lloyd George, the British Prime Minister, stated before the House of Commons that “ . . . tens of thousands of [Greek] men, women and Children were expelled and dying [in the Ottoman Empire]. It was clearly a deliberate extermination.”
Between 1914 and 1923, 1.5 million Armenians were brutally killed, along with hundreds of thousands of Greeks and Chaldeans. Nearly half of the Pontic Greeks on the Black Sea Coast were killed and the Christian population of Smyrna was massacred in 1922. The Armenians, Greeks, and Chaldeans were not armed soldiers. They were civilians whose ancestors had lived inside the Ottoman Empire for hundreds of years. There is little question that this was in fact genocide.
The documentary evidence is clear. The American ambassador at the time, Henry Morgenthau, wrote to the United States with alarm about the exterminations. There are numerous first-hand memoirs, such as that of Grigoris Balakian, that recount the horrors of those years. In addition, the thousands of bleached skeletons tell no lies.
Ever since, Turkey has described the Christian deaths as casualties of war. The world knew genocide had happened, but there were no consequences. Unlike after World War II, there was no Nuremburg or other war tribunals. There was no retaliation and the wider world simply continued as if nothing had happened. Indeed, Adolf Hitler used the example of the Armenian Genocide’s lack of condemnation to support the Holocaust. When questioned about the policy of Nazi persecution of the Jews, Hitler responded, “Who, after all, speaks today of the annihilation of the Armenians?”
The Long Wait for American Recognition
Despite such overwhelming evidence, the so-called Turkish “gag-rule” convinced the United States to avoid officially acknowledging the Armenian Genocide. To this day, Turkey vehemently denies that the deaths were part of genocide, instead calling them wartime casualties. It has brought pressure to bear against the United States and other governments to stop them from acknowledging even the slightest notion of genocide on the part of their Ottoman ancestors. President Obama promised to recognize the genocide during his election campaigns, but he repeatedly declined to call the massacres genocide. President Trump similarly rejected calls to recognize the Armenian Genocide.
Recognition by Congress
American recognition has come not from the most expected channel, the president, but through Congress. The House of Representatives passed a recognition resolution at the end of October 2019 and the Senate passed this same resolution on December 12, 2019.
The preamble of the text of the resolution lays out the ample evidence of genocide. Morgenthau, the contemporaneous American ambassador to the Ottoman Empire, described it as a “campaign of race extermination.” Raphael Lemkin, the scholar who created the term “genocide,” used the Armenian Genocide as one of his primary examples. Hitler used the Armenian Genocide as a precedent for the Holocaust.
The resolution itself sets out a three-part policy: (1) commemoration through official recognition and remembrance; (2) reject denial; and (3) education. This tripartite policy is aimed at not just a one-time recognition with no teeth, but a continuous act of recognition, rejection of denial, and education about the genocide.
Especially important is the fact that while the resolution defines the Armenian Genocide as the killing of Armenians; it goes on to say that the United States provided for the “survivors of the campaign of genocide against Armenians, Greeks, Assyrians, Chaldeans, Syriacs, Arameans, Maronites, and other Christians.” This is significant because while the Armenian Genocide has been recognized in over two-dozen countries, the genocide of other Christians, including the Greeks, by the Ottomans has been almost unanimously ignored. Indeed, only Greece and Armenia have recognized the Greek Genocide. Similarly to the U.S. resolution, Greek law 4285/2014 outlaws the denial of the Greek and Armenian Genocides in the Ottoman Empire.
This sentence could include American recognition of the broader genocide against Christian minorities inside the Ottoman Empire in addition to just the Armenians. This would put the United States at the forefront of recognizing and condemning the entire policy of genocide against Ottoman Christian minorities, the first genocide of the twentieth century.
* Michael Goodyear is a J.D. Candidate at the University of Michigan Law School. He has an A.B. in History and Near Eastern Languages and Civilizations from the University of Chicago. He has been published in a variety of academic and general-interest publications, including Le Monde diplomatique, the Michigan Journal of International Law, and The Medieval Magazine.