By Tasos Kokkinidis
December 10, 2019
Facebook
Twitter
WhatsApp
Linkedin
Email
A group of scientists announced on Sunday in Thessaloniki that they had discovered bones “most certainly” belonging to a woman who was buried centuries ago at the cemetery of Pantokratoros Monastery on Mount Athos.
The Greek “Holy Mountain” with its nearly 1,800-year continuous Christian presence is home to twenty monasteries where only men are allowed to visit.
The bones were discovered during restoration work being done on the floor of the chapel of St. Athanasios of Athonitis, where all burial ceremonies of laymen connected with the monastery have taken place.

Restorer Phedon Hatziantoniou, who led the team of experts, speculated that the bones might possibly belong to a woman called Stasha, the wife of a 16th-century landlord called Barboul or Barbouli who lived at the monastery with his sons.
The remains have been sent to specialized laboratories in Athens for further examination.
“As far as I know this is the first case that bones belonging to a woman have been discovered on Mt. Athos,” Hatziantoniou said in an interview with Greek daily newspaper To Ethnos.
“It is well known that in the past, when there were invasions or revolutions, the monks opened their border and their monasteries to protect the local population,” he explained.
The scientists have also discovered fragments of bones belonging to men in their research. They say that these were probably workers and support staff, since monks have their own ossuary inside the monastery’s main building. 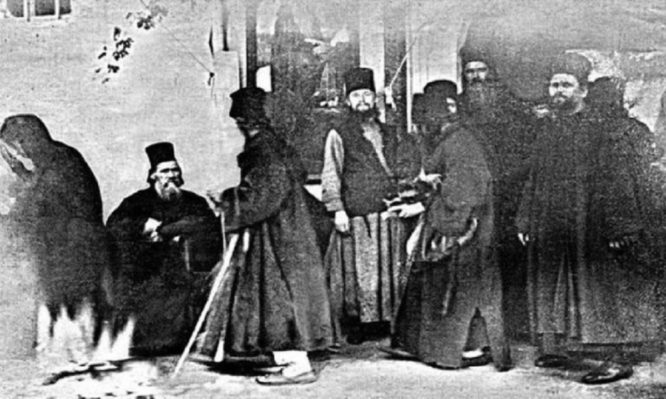 Reports of sightings of women on Mt. Athos have been quite rare over the centuries. However, a grainy, black and white photograph of a woman which was published in a Greek newspaper in 1903 still remains a mystery, with some monks claiming that they believe the unknown female on the left was the Virgin Mary herself.
The stooping figure also closely resembles a black-robed Orthodox nun.
The women’s ban on Mount Athos has been violated twelve times (officially at least) since the year 382. The following are the incidents in which this is known to have happened.
– In 382 by the Plakentia, the daughter of Emperor Theodosius I.
– In 1081 and 1108 by shepherd families (numbering more than 300).
– In 1345 by the Eleni, the wife of Serbian Emperor Stefan Dusan.
– In 1404 by the wife of Ioannis Palaiologos.
– In 1854 by a group of young girls who sought protection after the Halkidiki uprising.
– In 1905 by the young Russian princess Tatiana Nikita.
– In 1929 by Aliki Diplarakou, the Greek “Miss Europe” — dressed as a man!
– In 1931 by French journalist Maryse Choisy, who disguised herself as a sailor and wrote about her experience in a book entitled “One Month With Men.”
– In 1948 by a group of women from the Democratic Army of Greece who broke the guard and entered as they were being chased by the Greek Army during the Civil War.
– In 1953 by American teacher Cora Miller.
– In 1971 by French philologist Jacqueline Michele and Italians Luisa Barbarito and Maria Pastterla.
Greek journalist Malvina Karali was the most recent woman to break the ban and enter onto the territory of Mount Athos, when, as she claims, she entered the sanctuary dressed as a man in the 1990s.