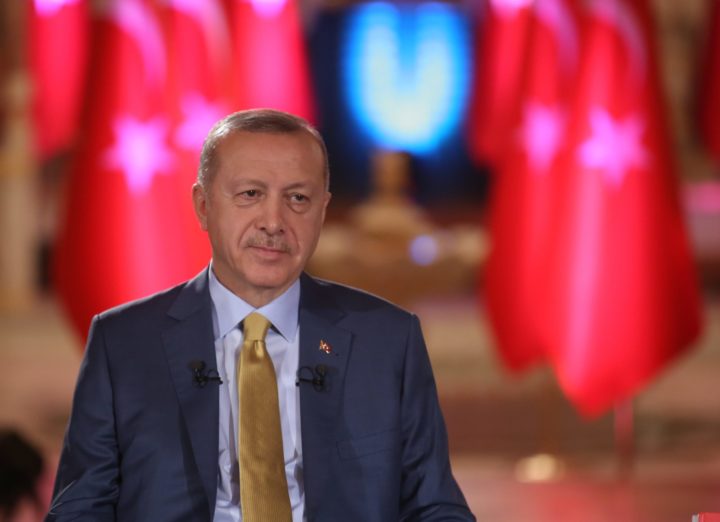 Turkish President Recep Tayyip Erdogan gave an interview to the Turkish state-run TRT television network on Monday evening in which he announced Ankara’s plans to conduct drillings in cooperation with Libya southeast of Crete.
In an unprecedented statement denying Greece’s sovereign rights in the broader Eastern Mediterranean Sea, Erdogan sat on a golden chair in the studio while presenting a series of maps of the area and explaining how his ”agreement” with the government of Tripoli ”has tied Greece’s hands.”
Erdogan showed a map of the Eastern Mediterranean on a huge screen at one point.
There, with a series of pin-points, he highlighted what Turkey perceives as the boundaries of its own continental shelf, blatantly ignoring the longstanding and internationally-recognized sovereign rights of Greece to the islands of Crete, Karpathos, Rhodes and Castellorizo.
This is the first time the President of Turkey had openly and publicly declared Ankara’s plans for the broader region.

While explaining what he said the map showed, Erdogan mentioned that Turkey’s maritime borders are right next to the Greek islands, adding that Turkey will be able to ”easily” conduct its drillings in this region, with Libya conducting its own further south.
President Erdogan was referring to the sea area southeast of Crete, where Ankara claims to have maritime borders with the African Arab nation.
Thus, by completely ignoring the influence these islands have on the actual maritime borders of the region, Erdogan showed how, according to him, his country has now become a neighboring state of Libya.
For this reason, he further stated that Turkey plans to purchase a third drilling ship in the coming months.


Erdogan Claims the Libyan Agreement “Has Made Greece Go Mad”
In his usual pompous style, President Erdogan reiterated in the interview that his government’s recent agreement with the Libyan administration has ”tied Greece’s hands and this has made her go mad.”
He then opined that there is nothing Greece can now do about it.
Erdogan also repeated his claims that Greece’s decision to expel the Libyan ambassador was an ”international scandal,” warning that Athens will pay a heavy price for these ”wrong steps” it has taken.
Greece, Israel, Egypt and Cyprus Cannot Do Anything, According to Turkish President
The Turkish President went on with his arrogant and fanciful rhetoric, even going so far as to claim that no nation in the entire region can do anything unless Turkey authorizes it.
”Greece, Israel, Egypt and the Greek Cypriot Administration of Southern Cyprus cannot take any step without our approval,” Erdogan stated.
It is noted that all major states have publicly expressed their condemnation of the Turkish-Libyan agreement, even including Moscow, nowadays seen as a close ally of Ankara.