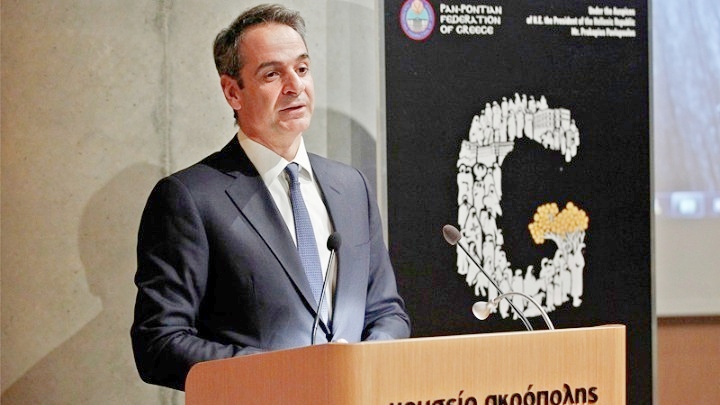 The Pontian Genocide was a tragic chapter in the history of modern Greece, and the lessons it holds must prevent its repetition anywhere in the world, Prime Minister Kyriakos Mitsotakis said on Friday, during his opening remarks of the International Conference on the Crime of Genocide held in Athens.
Organized by the Pan-Pontian Federation of Greece to commemorate the centennial of the genocide of Pontian Greeks by Turkey, the conference is taking place at the Acropolis Museum on Friday and the Stavros Niarchos Foundation Cultural Center on Saturday and Sunday.
Welcoming the conference, Mitsotakis said its key contribution lay in its focus on the future, or “how we shall learn from it, how we shall prevent the reliving of similar tragedies in our own lives, anywhere in the world.”
The historic event, he said, must lead to “results that will arm the modern world to avoid experiencing such brutality again. This will be a heritage for all of humanity, not just Pontian Hellenism.”
“It’s not the first time Greece faces storms,” Mitsotakis added, “but it has always had the resilience to overcome them, returning to calmer waters. It has always kept its strategy on a straight line but has not hesitated to plan its tactics with flexibility. It has always taken care, however – and I would like to stress this – to choose the right allies,” the Greek Premier noted.
You can watch the conference live on the website Live Media by clicking here.