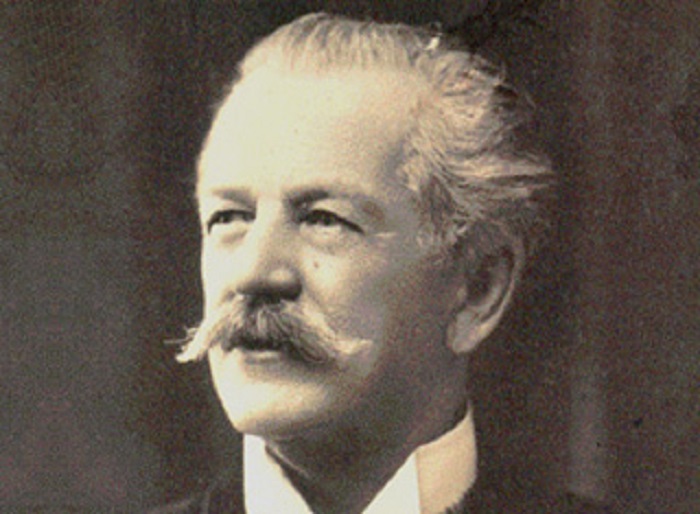 German architect Ernst Ziller, who later acquired Greek citizenship as Ερνέστος Τσίλλερ, left his own eternal, and magnificent, imprint on Athens and other Greek cities by designing some of their most iconic buildings.
It is no wonder that nineteenth century Athens was characterized by many as “Ziller’s Athens.” The brilliant architect was one of the main representatives of neoclassicism in Greece. He either designed or oversaw the construction of approximately 500 buildings  in Greece from 1870 to 1916.
Many of his buildings remain standing tall today, reminding Greeks and visitors of the splendors of the school of neoclassicism. It continues to be remarked on how his graceful, elegant buildings stand out amidst the plain concrete and glass structures seen in most of the capital and other cities.

Ernst Moritz Theodore Ziller was born on June 22, 1837 in Serkowitz, Saxony, the eldest of ten children of the renowned builder Christian Ziller. He studied at the Dresden Academy of Fine Arts and was distinguished for his work, for which he received a silver medal upon his graduation in 1858.
He was immediately hired as a designer in the Vienna offices of famous Danish architect Theophilus Hansen. The Dane, having at that time already drafted the plans for the Academy of Athens, appointed Ziller to oversee the project.
In 1861 the young architect moved to Athens and supervised the construction of the Academy of Athens building, and later, the National Library building as well.
However, after the expulsion of King Otto from Greece, the work on these public buildings came to a halt and Ziller left the country. He returned to Vienna in 1864, where he continued to work at Hansen’s office.

During this same period Ziller also made a series of educational trips to several Italian cities, including Verona, Rome, Florence, Venice, and Pompeii, where he carried out on-site architectural studies of their glorious buildings.
In 1868 Ziller returned to Greece to work as a freelance architect. The personal friendship he developed with King George I and his popularity with the bourgeoisie of the Greek state, attracted by his fascinating life and travels, enhanced his professional reputation.
His great popularity led to him being granted many commissions for the designing of public and private buildings, including houses and villas.
On a trip to Vienna in the spring of 1876, Ziller met pianist Sofia Doudou, daughter of Kozani merchant Konstantinos Doudos. The couple were soon married and they had their first child in 1879. The couple had four more children in the coming years.

Ziller’s rapid professional progress and his marriage to a Greek woman were the decisive factors prompting him to settle permanently in Greece and acquire Greek citizenship. An extraordinarily productive architect, Ziller designed and oversaw at least 500 major public and private buildings in Athens and other Greek cities, including Patras, Pyrgos, Thessaloniki, Tripoli, Ermoupoli and Syros.
At the same time, he is said to have contributed to the planting of trees on iconic Lycabettus Hill in the Greek capital city.
In 1872 Ziller was given a seat in Athens’ School of Architecture of the School of Arts (later the National Technical University of Athens), but unfortunately he was dismissed in 1883 for refusing to conceal the financial wrongdoings which delayed the construction of the Zappeion building.

The following year the visionary architect was appointed Public Works Director in the government of Charilaos Trikoupis, who was trying to restore Ziller’s reputation and career. Sadly, the architect was forced to leave this post in 1893, after the Greek state went bankrupt, which resulted in the cutting of his position.
By the beginning of the 20th century, Ziller was facing serious financial problems since he had also lost almost all his fortune due to a failed investment he had made with two of his friends.
As a result of these woes, his home, called “Ziller’s Palace,” which he built from 1882 to 1885, had to be sold at auction in 1912. (Fortunately, the Ziller family also maintained a summer residence in Kifissia, situated on a palatial, 40-acre estate).
Their city house was bought by banker Dionysios Loverdos, and the elegant neoclassical building fortunately still stands proudly today in central Athens.

The brilliant architect died in Athens on November 10, 1923, and was buried in the First Athens Cemetery.
Noteworthy Athens works by Ernest Ziller include The Presidential Mansion; the National Archaeological Museum of Athens; the Numismatic Museum of Athens; Melas Mansion; the Heinrich Schliemann Mansion (called “Iliou Melathron”); and the Central Post Office of Athens.
Other architectural gems designed by Ziller include The Royal Palace in Tatoi; the German and Austrian Archaeological Institute; the National Theater; the Hadjikosta Orphanage; the Military Academy (School of Evelpidon, now the Athens Court of First Instance); the Palace on Herod Atticus Street and the Atticon Theater — and others.
His most important works outside Athens include the Theater of Zakynthos, the Theater of Patras (1872), the City Hall of Ermoupolis on Syros, the markets of Aigion and Pyrgos and the Judicial Palace of Tripoli, as well as a host of others.
The naturalized Greek citizen also designed several important churches around the nation, including the Church of the Transfiguration of Christ at Vilia.