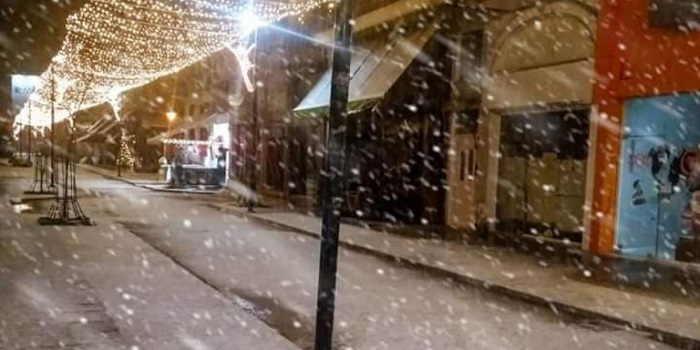 A cold front which is sweeping Greece is bringing heavy snow to many northern parts of the country.
Snow, accompanied by freezing northerly winds, fell overnight on Tuesday and Wednesday morning in towns in the regions of Macedonia and Thrace, including Kozani, Florina and Oreokastro.


Much of the prefecture of Thessaloniki, as well as mountainous parts of Halkidiki, saw snowfall.
The regional police authority for central Macedonia warned motorists that anti-skid chains would be necessary in some parts of the road network, particularly on country roads.
According to the Athens National Observatory’s Meteo weather service, the cold snap, which will result in a significant drop in temperatures, is moving toward southern parts of the country on Wednesday.


Snow will continue to fall on Wednesday in many low-altitude areas of Macedonia, while rain will fall in Thessaly, Eastern Sterea Ellada and the Peloponnese, Euboea and the Cyclades.
Beginning at noon on Wednesday, local showers and rain are expected mainly in Thessaly, Eastern Sterea Ellada, the Peloponnese and Crete, but these will gradually taper off there as well.
At the same time, there will be an increase in the strength of the northerly winds from this system, which will reach eight on the Beaufort scale locally on Tuesday and Wednesday, favoring gale conditions.