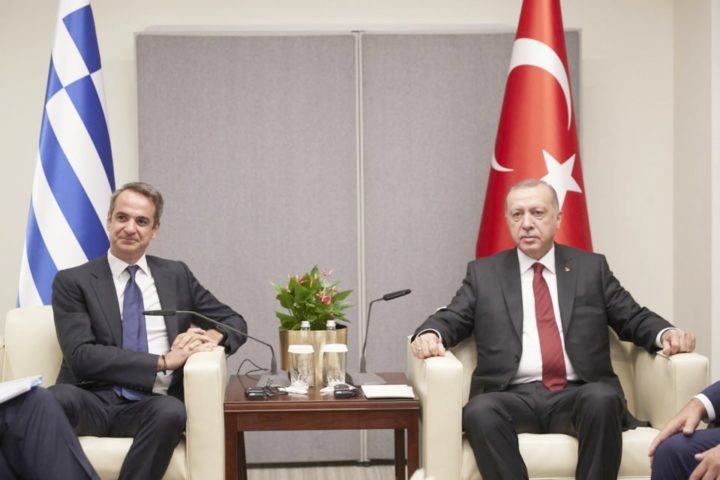 Recep Tayyip Erdogan, the President of Turkey, told reporters on Tuesday morning that he intends to meet Greek Prime Minister Kyriakos Mitsotakis in London, concurrent with the NATO summit which will take place there on Tuesday and Wednesday.
According to Turkish media reports, President Erdogan said that he wants to ”brief” the Greek Premier about the ”effective maritime borders” agreed upon between his government and the government of Libya.
The meeting is expected to take place at 14:30 London time on Wednesday.
Commenting on Greece’s ultimatum to the diplomatic envoy of Libya to Athens, Erdogan used a provocative tone, saying that Libya might withdraw its ambassador to Greece first before Athens expels him.
Mitsotakis is expected to raise the issue of the ongoing, repeated Turkish provocations at the NATO meetings on Tuesday and Wednesday.
He said that he will not only refer to the Turkish provocations but ask the Alliance to adopt a position. “An alliance cannot be indifferent when one member is openly violating international law and thus turning against another member. An equal-distances approach is unfair to Greece, which has never sought to stoke tensions in our region.”
The Greek Prime Minister has already indicated that his country “knows how to defend its rights with confidence, calmness and efficiency.”
It is noted that during the last several days, the escalation of Ankara’s provocations has reached an unprecedented level, with the country’s Foreign Ministry publicly disputing the limits of the Greek islands’ maritime jurisdiction for the first time ever.