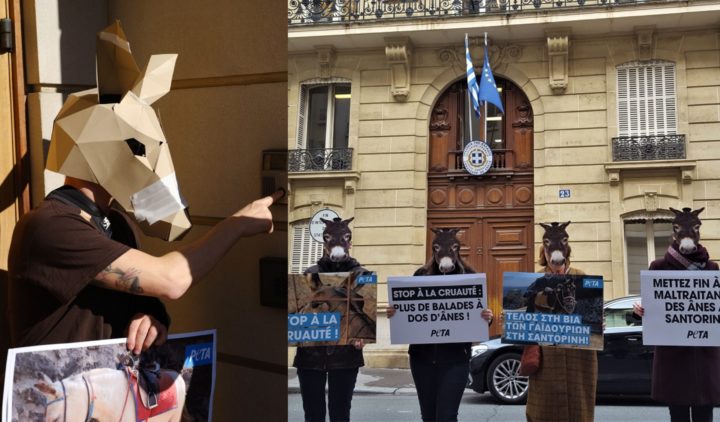 Scores of protesters demonstrated on Thursday outside Greek Consulates and Embassies around the world, asking for an end to what they call ” Santorini’s notoriously inhumane donkey rides.”
The activists, most of whom are members of the organization People for the Ethical Treatment of Animals (PETA), protested outside Greece’s embassies and consulates in London, Washington DC, Paris, Berlin, and Sydney as well as other cities on most of the continents of the world.
According to a PETA Australia statement, ”the demonstrations were held after a new undercover investigation revealed continuing animal abuse on Santorini.”


The Australian branch of the organization claims that ”even though laws were passed to protect donkeys following a PETA Germany exposé on the island in 2018, this recent footage reveals that abuse still occurs. Donkeys and mules, many with painful wounds, are still being used as “taxis” for tourists.”
Local authorities on the beloved Greek island, which overflows with tourists all summer long, claim that all business conducted using donkeys complies with the strict law Greek authorities passed in 2018.
However, the PETA activists insist that this ”tradition” has to end, since donkeys suffer, especially due to the extreme heat and sunshine of Santorini’s long summers and the island’s extraordinarily difficult terrain.