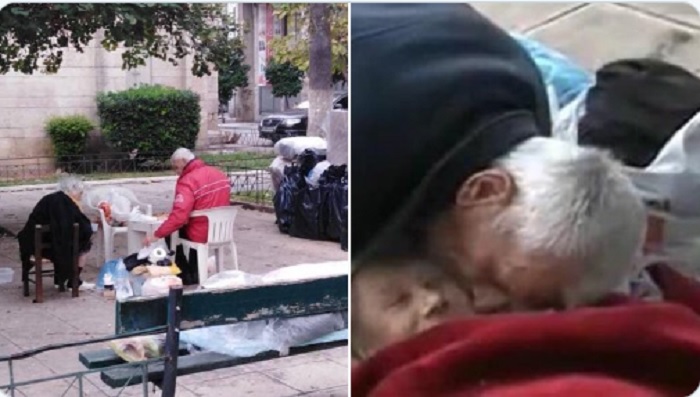 An elderly Greek couple who were recently made homeless has been camping outside a church in the Keramikos district of central Athens for more than 40 days.
Philip, 84 and Eleni, 83, who are only known by their first names, had been evicted from their home because they were unable to pay their overdue rent.
The plight of the white-haired couple has deeply moved the Greek public, and many citizens are using social media to call on the government and the municipality of Athens to help the elderly pair. Others are calling on the church itself to open its doors and allow them to shield themselves from the cold, rainy November weather.
The municipality of Athens has stated publicly that it has offered to move Eleni and Philip to temporary accommodations, but the couple refused.
Video footage shows the couple sleeping rough on the marble pavement outside the church. One still photograph shows Philip kissing his elderly wife tenderly on the cheek.
The only possessions they managed to take from their former home are a mattress, a few blankets and clothes, and three chairs.
Despite their current hardships, Philip is not angry at the landlady who evicted them. “We lived there for four years. I understand why she evicted us. She also had lots of obligations to fulfill,” he explains.
The 84-year-old said he is simply awaiting the next installment of his pension, a mere 600 euros, so he can rent another small apartment for himself and his wife to live in.