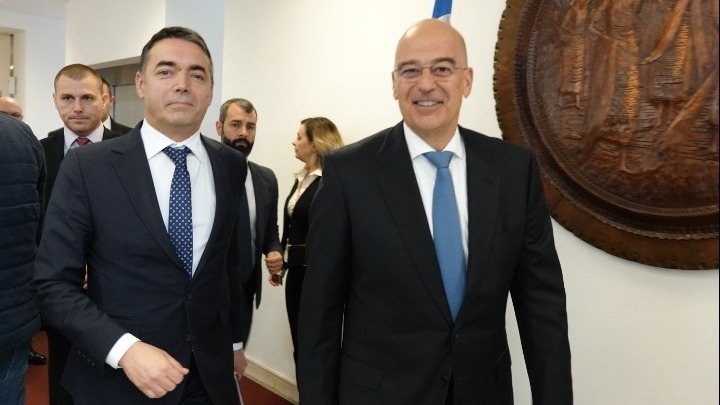 Greece’s Foreign Affairs Minister Nikos Dendias on Tuesday reiterated Athens’s support for the EU accession prospects of North Macedonia during a meeting with his counterpart Nikola Dimitrov in Skopje.
Dendias did however underline that this depends to a great extent on implementing certain reforms and on an alignment with the European aquis.
“I share North Macedonia’s disappointment about the 28 EU member states not reaching a positive decision on starting accession negotiations,” the minister said, adding that “on our part, we have done all we could towards reaching a positive decision on this issue, in coordination with our EU partners.”
Dendias also made known that he had invited both his Albanian and North Macedonian counterparts to a working breakfast with the EU foreign ministers on December 9.
Referring to the Prespa Agreement, he noted how this needs to be implemented fully and diligently. Great progress has been made to that effect, he asserted, yet a great deal more needs to be achieved as relations between the two countries still depend on the fulfillment of commitments embedded in the agreement.
Responding to Dendias’ statements, North Macedonian Foreign Minister Dimitrov said that he too sees the need for the full implementation of the terms of the Prespa Agreement, and referred to Greece as a strategic partner and friend of North Macedonia, as both countries must take advantage of the new perspectives that have opened up by the accord.
On the April 2020 national elections having a potentially negative impact on the agreement, Dimitrov said it must be implemented despite any and all elections, as it has also become part of his country’s legal system and as such it cannot be challenged by anyone in North Macedonia, he added.
The Greek Foreign Affairs Minister also met with North Macedonia’s President Stevo Pendarovski and Prime Minister Zoran Zaev.
Source: AMNA