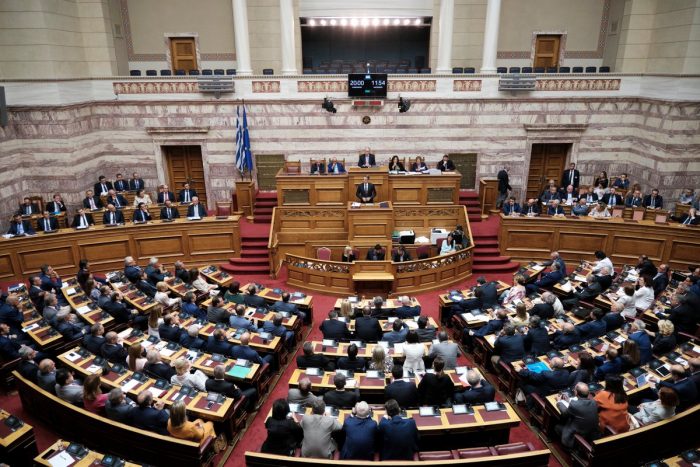 The final version of the ruling New Democracy’s (ND) proposed constitutional amendment concerning the voting rights of Greeks abroad was submitted to the Parliament plenary on Friday, by ND general rapporteur Kostas Tzavaras.
The ND proposals outline the main directions of the amendment, which will then be made specific in draft legislation to be brought before Parliament in the coming days.
The ruling party has proposed the addition of a new, fourth paragraph to Article 54 of Greece’s Constitution.
Effectively, the ND constitutional proposal makes it possible for a law to be passed with the votes of 200 MPs that permits state deputy election candidate ballots to include expatriate Greeks, making them part of the electorate body.
It also permits political parties to have representatives of Greeks abroad on their state deputy tickets.
The new amendment also states that a future law will determine the way the votes of expatriate Greeks will be counted – whether in individual precincts or as part of the nationwide vote. This will be enacted through a law that will be passed by a relative majority in the House (normally 151 votes).
Finally, it allows the founding of expatriate precincts abroad through a law requiring 180 votes to pass.
All these terms that have been included in the amendment raise the hopes for unanimous support in the vote that will take place on Monday.
All parliamentary parties have expressed, one way or the other, their cautious support to the governmental amendment and it remains to be seen whether this historic vote will garner the absolute unanimous support in the House; something extremely rare in the country’s political history.
If the governmental constitutional amendment passes, then a new law is expected to be brought forward soon, specifying all the details of the way Greeks abroad will be able to vote in the country’s national elections from their place of residence.