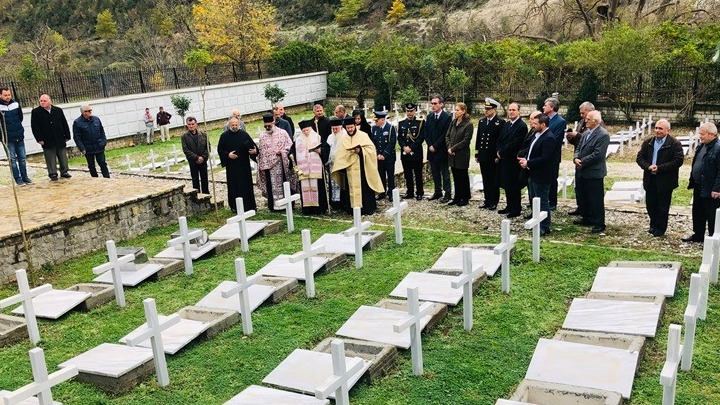 The remains of 193 Greek soldiers who died in Albania during the Greek-Italian war in 1940-41 were given a Greek Orthodox burial on Tuesday at the military cemetery of Kelcyre (known as Kleisoura in Greek).
Metropolitan Demetrios of Gjirokaster conducted the memorial service, which was attended by Greek Ambassador to Tirana Sofia Filippidou, head of the joint Greek-Albanian experts committee for the search and identification of Greek soldiers’ remains.
Greek and Albanian members of the committee, as well as Air Chief Marshal Constantine Agos, local government officials and members of the Greek community in Albania also attended the service.
Of a total of 8,500 Greek soldiers who died in the Greek-Italian war in Albania, the greatest number died at the bloody battles of Kelcyre and Premet, which took place nearby.
The bones of the soldiers, many of which were collected from nearby hills and ravines around the town and the mountain pass of Kelcyre, were covered with the Greek flag and placed in separate ossuaries.
The event observes a bilateral agreement from 2009 which aims to encourage the disinterment, identification and reburial of the bodies of Greek soldiers from WWII. The agreement came into effect in January of 2018.
Since the implementation of the agreement, the number of remains of Greek soldiers at the two officially recognized Greek military cemeteries in Albania has reached 1,050. Of these, 950 soldiers have been reburied at the Kelcyre cemetery and 100 at the cemetery in the village of Bularat, where members of Albania’s Greek minority live.
Expressing its satisfaction that the souls of the fallen Greek soldiers will be able to rest in peace nearly 70 years after their ultimate sacrifice, the Foreign Affairs ministry welcomed the collaboration with the Albanian side on this sensitive humanitarian issue.
Source: AMNA