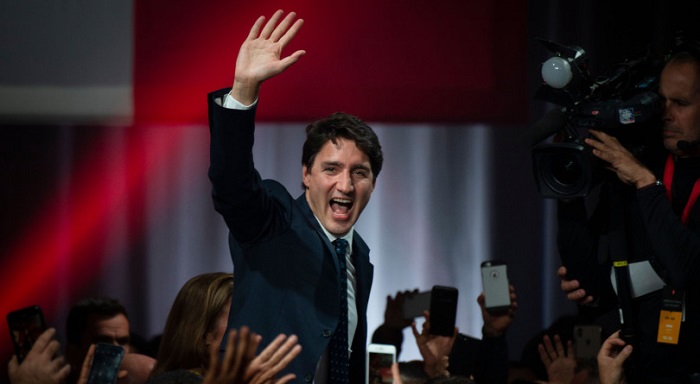 On November 20 the newly re-elected Canadian government of Justin Trudeau will begin its next chapter with a swearing-in. There is much Mr. Trudeau can learn from Greece, and Prime Minister Kyriakos Mitsotakis and his four-month-old government.

By all appearances, the circumstances surrounding the two governments couldn’t be more different.

The task Mr. Mitsotakis faced upon getting elected, charting a country’s future following a decade of economic crisis, was not insignificant. Mr. Trudeau does not face nearly the same challenge, though he must now govern a country where his party didn’t win a single seat in the western provinces of Saskatchewan and Alberta. In addition to dealing with growing ‘Western alienation,’ he must also address and repair embarrassing image problems that arose during the campaign after multiple photos and a video surfaced of him in blackface.

What’s also different is that Mr. Mitsotakis won a clear majority, whereas Mr. Trudeau now finds himself helming a minority government — albeit a strong one.

To start, Mr. Trudeau should follow the example set by Mr. Mitsotakis and take quick steps and bold action across multiple fronts. In Greece, following the July 7 election and swearing-in the next day, later that same week Mr. Mitsotakis was introducing a new finance and taxation bill in the Hellenic Parliament. Very quickly soon after, other initiatives followed in critical areas: policing, migration, climate action and vital relationship-building on and off the continent.

For Greece’s new government, stronger relations with China signify the way forward — that the country has entered a new era and that a Greek-Sino partnership is an important part of that new chapter. This is apparent, not only in last week’s visit of President Xi to Athens but also in the Greek delegation that participated in the recent International Import Expo in Shanghai. For Mr. Trudeau, repairing self-inflicted damage he and his government incurred with China in their first term is mission critical. China is a major trading partner for Canada, and there are strong current and historical ties between the two countries. Renewing diplomatic relations may also help Mr. Trudeau with his Western alienation problem; if his government can do a better job of getting more of Canada’s oil resources to international markets, China may be integral.

Mr. Trudeau can and should also look to Mr. Mitsotakis, also the son of a former prime minister. He inherently understands the practical realities of doing politics and the decorum that holding the highest office of the land requires. Arguably Mr. Trudeau’s biggest problem in his first term was poor communications anchored by gimmicks such as colourful socks and calculated postings on social media. In contrast, and though only four years older, Mr. Mitsotakis conducts himself quietly, in a reserved manner and without flash while sending the message he is ‘getting the job done.’ Immediately upon taking office, he quickly conveyed the impression that, to use a loaded phrase in a Greek context, he was the ‘adult in the room.’ Mr. Trudeau very much needs to do the same.

If Mr. Trudeau hopes to govern beyond a second mandate, he may be able to quickly turn a strong minority into another majority in short order. There is general good will towards his government’s policies — particularly his stance on climate and green infrastructure. Though he was re-elected with a low plurality, he now faces a weakened opposition. However, if he adopts a Mitsotakis-like approach, he may be able to quickly win back the hearts and minds of Canadians. For Mr. Trudeau, the future rests squarely in his own hands.

*Andrew Tzembelicos is a Greek-Canadian writer, editor and communications consultant who divides his time between Athens and Vancouver