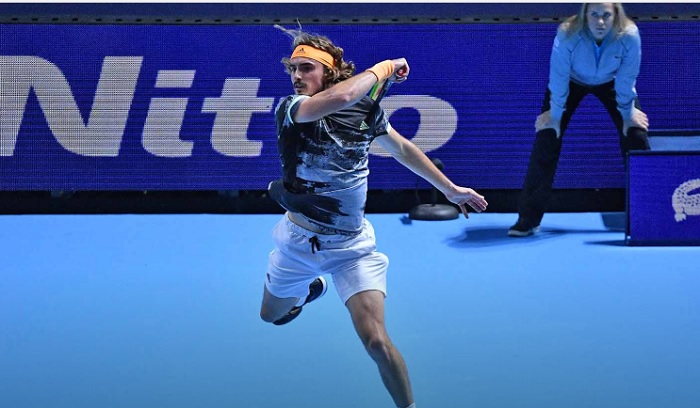 Stefanos Tsitsipas saved the first nine break points he faced against Roger Federer on Saturday afternoon en route to beating the Swiss by two sets to love (6-3, 6-4) at the Nitto ATP Finals semi-final.
In an inter-generational clash, Tsitsipas, 21, produced an outstanding display to dispatch six-time champion Roger Federer, 38, at London’s O2 Arena and advance to the the final in his tournament debut.
“I remember myself being one of these kids here, watching the event and… I could never picture myself standing here, but it did happen,” Tsitsipas said. “Dreams do come true.”
After closing the match with an ace, Tsitsipas will face the winner between Dominic Thiem and defending champion Alexander Zverev in Sunday’s final. Thiem leads Tsitsipas 4-2, while Tsitsipas leads Zverev 4-1.
The winner will take home $1,354,000, with the runner-up landing $657,000.

The youngest finalist at the season-ending event since Del Potro in 2009!

Stefanos Tsitsipas had warned Roger Federer that he feels fresher despite losing his match with Rafael Nadal on Friday three sets after two hours and 52 minutes of action.
“My body feels well currently. I don’t feel pain anywhere. I feel fresh, honestly,” he said.
“After having a long, difficult match like this, I feel like I can go out and play tomorrow the same way. So I don’t have any problem with that.”