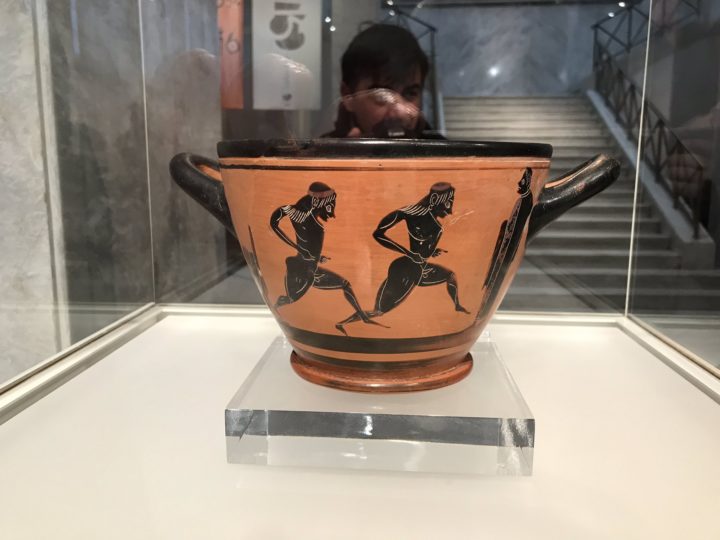 ”Skyphos,” an ancient pottery vessel won by Spyros Louis, the first winner of the Marathon in the first modern Olympic Games of Athens in 1896, was returned to Greece from Germany recently and was put on public display in Athens on Wednesday.
The prize, awarded to the great Greek runner along with his gold medal, was presented in the altar room of the National Archaeological Museum of Athens, where people will be able to view it until February of 2020.
Following its repatriation from Germany, the ”skyphos” will be on permanently exhibit in the Museum of the Olympic Games in Olympia, Western Greece.
The ancient vessel, awarded as a prize for winning the first marathon of the modern Olympics, had gone missing for years.
An immense effort began in 2012 by the National Archaeological Museum to locate the priceless piece of ancient pottery, but the task proved too difficult at the time.
The almost-perfectly-preserved vessel was eventually found in the University of Munster, Germany several years later.

This skyphos was the prize for the winner of the 1st Olympic marathon in 1896, Spiros Louis. Am delighted that it was returned to Greece today by the University of Münster, Germany 🇬🇷🇩🇪🇪🇺 pic.twitter.com/EPMcGJZoeH

The process of verifying its authenticity took a great deal of time, but it was eventually declared that the object at this German university was indeed the very bowl once awarded as a prize to Louis in 1896.
The object itself, which dates back to 540 BC, had first been unearthed from a tomb located in Boetia.
The ancient vessel, and eventual Olympic prize, was secretly transported from Greece to Germany in the 1930s.
A Nazi officer serving in the German Archaeological Institute of Athens at that time secretly took the object — along with other diplomatic material — out of the country back in 1934, following an official visit of Joseph Goebbels, the Nazi Reich’s Minister of Propaganda.
It is understood that this was accomplished without the knowledge of the German Embassy in Athens.
Since that time, the object had seemingly dropped off the face of the earth.
The University of Munster, which had originally maintained that it had obtained the object lawfully, decided to return it to the country of its origin when it eventually discovered that it had been stolen from Greece.
Greek Minister of Culture Lina Mendoni thanked the German university for its gesture, noting that this was ”a wonderful gift to the Greek people.”