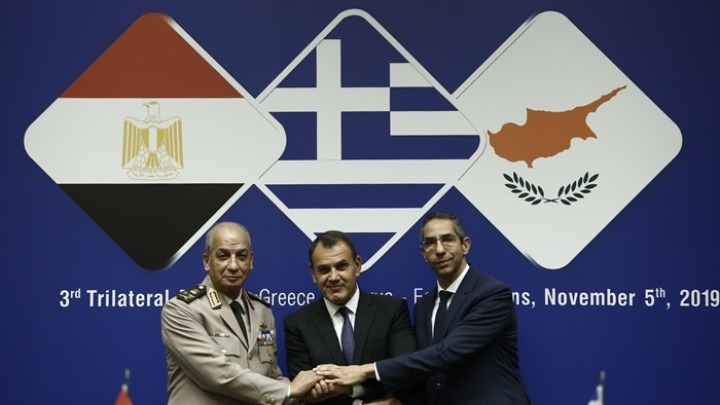 The defense ministers of Greece, Cyprus and Egypt condemned Turkey’s illegal actions in the East Mediterranean and Syria during a meeting held in Athens on Tuesday.
Reviewing the contents of a joint press release, Greece’s Nikolaos Panagiotopoulos said “we condemned Turkey’s illegal actions in Cyprus’ maritime zones that comprise a blatant violation of international law and the Law of the Sea Convention, as well as Turkey’s aggressive stance, with violations of the Greek air space and Greece’s territorial waters, which contravenes international law and the principles of good neighborhood.”
The three defense ministers agreed that the Turkish invasion of Syria “will lead to a new humanitarian crisis and increase even more migration flows from Turkey to Greece, as well as affect negatively our efforts to fight terrorism,” the Greek defense minister stated.
Panagiotopoulos, Egypt’s Mohamed Ahmed Zaki and Cyprus’ Savvas Angelides reaffirmed their mutual commitment to strengthen and expand their collaboration, and announced that the next meeting for the group will take place in 2020 in Cyprus.
On Wednesday, the three ministers will head to the Greek island of Crete, where they will observe the last phase of the multinational inter-branch military exercise named “Medusa.”