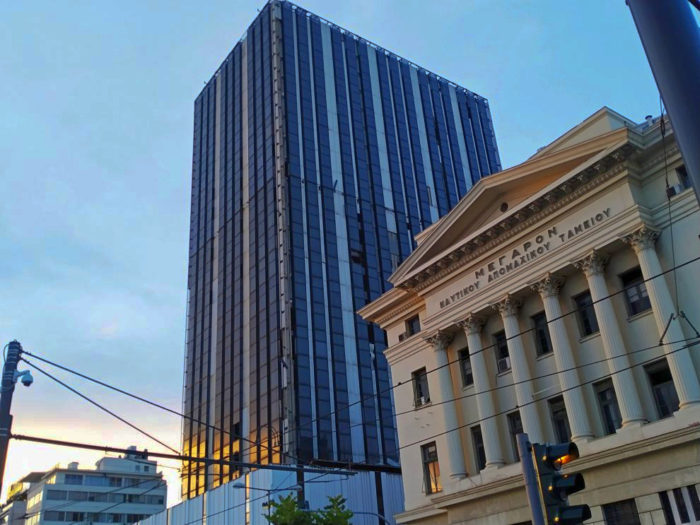 The Consortium of Cante Holdings Ltd. was approved on Monday as the provisional winner in the bidding for ownership of the Piraeus Tower building.
The economic commission of the municipality of Piraeus enabled the empty Commerce and Shipping Centre of Piraeus to open a new chapter by being handed over to the consortium, comprised of the European Investment Bank, the EBRD and Dimand companies as well as the National Pangaea REIC.
The fateful decision was made as a result of a meeting of the city commission on Monday.
The consortium will manage the tower building, which was left nearly empty for almost 45 years, for a period of ninety-nine years at an annual lease price of 1,010,000 euros, with a 2.0 percent price adjustment for every year.
The lease agreement envisages a mixed use of offices, shops, underground parking, and exhibition halls along with restaurants on the 19th and 20th floors. The project will have a budget of 41 million euros and construction will be complete in approximately 33 months, somewhere between 2022 and 2023.
Commenting on the project, Piraeus mayor Yiannis Moralis declared  that it was a significant moment for the city and its citizens as the building’s new uses will significantly raise the municipality’s revenues and upgrade the surrounding area.
The history of this iconic building goes hand in hand with the political history of Greece in the second half of the 20th century.
It also unfortunately epitomizes the country’s lack of developmental direction, since this gigantic edifice has remained mostly empty and unused for more than 45 years.

Rogue SpaceX Rocket to Collide With the Moon