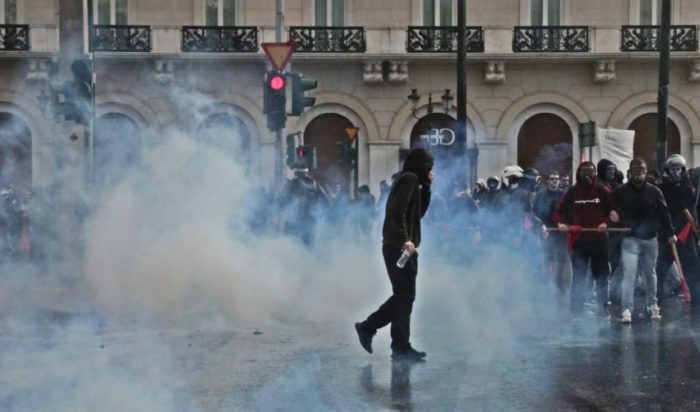 A peaceful protest, this time organized by associations of Greek high school students, turned violent on Monday afternoon when a group of unknown individuals attacked police forces outside the Greek Parliament in Athens.
At the exact same spot where similar clashes have taken place for several times over the last few weeks, a group of hooded individuals threw rocks and Molotov cocktail petrol bombs to police forces.
The police officers were blocking Queen Sophia (Vasilissis Sophias) Avenue in hopes of preventing clashes directly outside the property of the House.
When the unknown group of approximately fifty people attacked the police, the latter responded yet again with the widespread use of teargas, making it impossible for people to breathe normally in the nearby streets of the capital.
Those who initiated the clashes also attacked a photojournalist who was covering the incidents.
The unfortunate man sustained a slight injury to his head.
Police have arrested at least two people so far, one of whom was discovered to be carrying petrol bombs in his bag.

Greek Orthodox Easter, or Pascaha, is the most important religious feast of the year, with customs and traditions that have been part of Christianity...
Animals

the "Zero Stray Pawject," is committed to reducing the number of stray dogs in Greece, especially on Aegina, in a cruelty-free way.