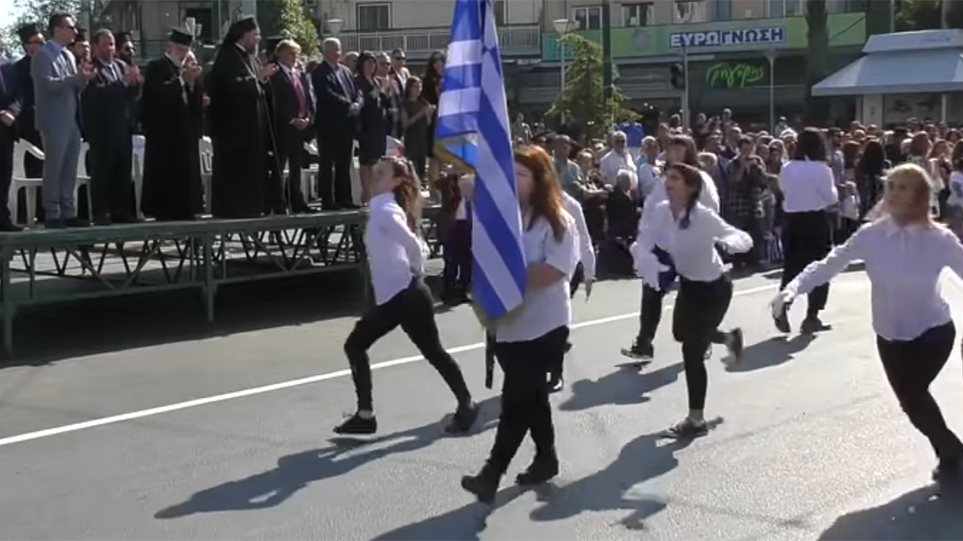 The act of ten young women, ridiculing the traditional student parade on OXI Day, has caused an uproar in Greece’s political world and Greek society in general, with a “war” raging in social media over the issue.

The ten women, headed up by another who was holding the Greek flag, marched along with the other students in the Nea Philadelphia suburb’s annual OXI Day parade. Once they reached the platform where the officials were standing, however, they began flailing their arms and legs and walking in a silly parody of the traditional marchers.

The video of the young activists quickly went viral and has divided Greeks over any possible justification for the act, with those who condemn it on the one side and those who are in favor on the other.

Those against the display argue that the act was an exhibition of vulgar disrespect to Greece’s war heroes who shed their blood to keep Greece free from the Axis forces during World War II. In the other camp were those who applaud the young women for their courage to ridicule what they view as the outdated student parades.
First to condemn the act was Nea Philadelphia mayor Yiannis Vouros, who called the young women “risible.” Several New Democracy ministers and MPs harshly criticized the act, saying that it desecrated the memory of those who fell in the Greek-Italian War.
On the other side, several main opposition SYRIZA lawmakers applauded the girls’ “activist action,” saying that student parades along to the music of military marches is an outdated custom that brings memories of the times of dictatorship and extreme-right rule.

With an open letter sent to a newspaper, the ten girls said they were pretending to be insubordinate soldiers at a military parade. They said that their stunt was inspired by the sketch “Silly Walks” by the British comedy group Monty Python.

The girls also stated that their performance was a protest against militarism and that they do not believe in the ideals portrayed by military parades. Also, it was a way to present themselves as the outcasts from a society that wants young people to think and act like obedient soldiers.

In addition, they claim that they chose New Philadelphia because it is a neighborhood where refugees from the Asia Minor Disaster once found shelter, and that today, refugees are the social outcasts.