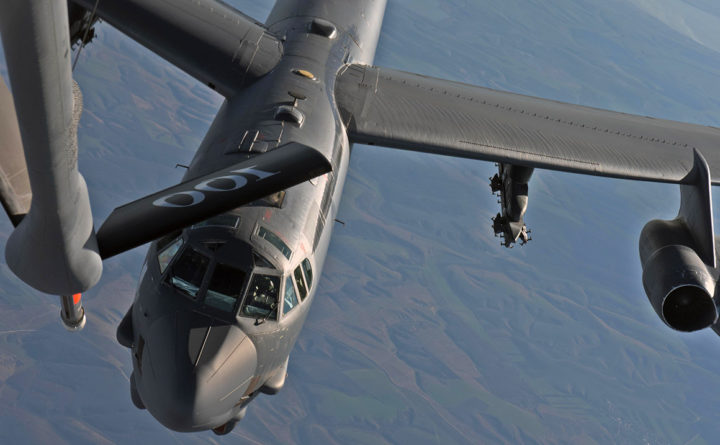 The enhanced strategic cooperation between Washington and Athens is set to take one step further on Wednesday, October 30, as two aircraft belonging to the legendary ”Boeing B-52 Stratofortress” bomber class will fly over Greece and Cyprus as part of a military exercise.
The ”Flying Fortresses,” as they are also known, will fly over Greece and through the Aegean Sea, going on to Cyprus, where they will conduct surveillance flights over the airspace of the Republic of Cyprus.
The American bombers will come to Greece from their base at RAF Fairford in England.
According to media reports, they will be accompanied by F-16 fighter jets from Greece, and will jointly conduct a series of exercises, including virtual bombings of enemy targets and protection scenarios as part of an operation.
The route is expected to be just barely inside the Flight Information Regions (FIR) of Athens and Nicosia, as the aircraft will pass right along the edges of both FIR’s.
The exercise was requested by Washington several days ago. The Americans asked the Greek Defense Ministry to include Greek F-16 jets which are set to accompany the American bombers on their exercises.
Greek analysts suggest that the American initiative to bring its ”trademark” military might to fly over Greece and Cyprus, not only indicates the excellent and enhanced level of the Greco-American relationship, but it also sends a clear message to all those who want to undermine the rights of Athens and Nicosia in the region.
B-52 Stratofortresses have been used by the US Army since the 1950s and are expected to continue their military mission until 2044, through the continued technical support and upgrades provided by the Boeing corporation.
Apart from their military operations, the US has traditionally used these aircraft as an indicator of its interest in a region, since it has been known to fly them over areas which have particular strategic importance for Washington’s interests.