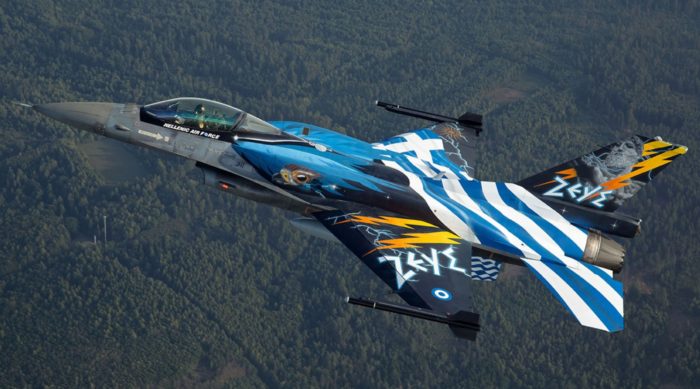 Over the last several years, the Hellenic Air Force (HAF) has been dazzling spectators during the military parades that are held in Thessaloniki every October 28, on the occasion of ”Oxi Day” celebrations.
Behind the impressive air shows are pilots from a team called the “F-16 Demonstration Team Zeus,” a dedicated group of super-skilled pilots who aim to showcase the capacity of the Greek Air Force before the public, boosting the morale of Greek society.
The “ZEUS” team displays the HAF’s airpower and also acts as an ambassador for Greece, demonstrating the professionalism and skills of all the pilots in the Hellenic Air Force.
As its official website notes, ”The team’s goals are to provide morale, inspire and recruit Greece’s best to join the service, to strengthen and grow public trust and confidence in the Hellenic Air Force and retain the quality force we currently have.”
The ”ZEUS” team uses F-16C “Block 52” aircraft in airshows not only in Greece but around the world.
The experienced pilots in the team carry out three different types of impressive aerial maneuvers, including high, low and flat formations.
For nearly ten years now, the ZEUS team has made Greeks proud wherever they participate by demonstrating the high-skilled capacity of Greece’s Air Force, one of the best Air Forces in NATO.
The video below is from a recent ZEUS airshow held in Austria.


The Zeus group has proudly inherited the tradition of the older acrobatic teams in the Hellenic Air Force.
These previous demonstration groups included the “Acro Team,” “Hellenic Flame,” “New Hellenic Flame,” and the “Carré of Aces,” among others.
Members of the Greek Air Force decided in 2009 to create a new demonstration unit featuring F-16’s, in order to showcase their abilities to a new generation.
This is why experienced Greek pilots underwent intensive training provided by some of their most skilled American colleagues from the United States Air Force (USAF), headquartered at Hill Air Force Base in Utah.
That state-of-the-art training marked a whole new era in Greek Air Force aerial shows and since then, the ZEUS team has begun their own, proud tradition, impressing audiences each time it flies over an official event or takes part in airshows all over the world.