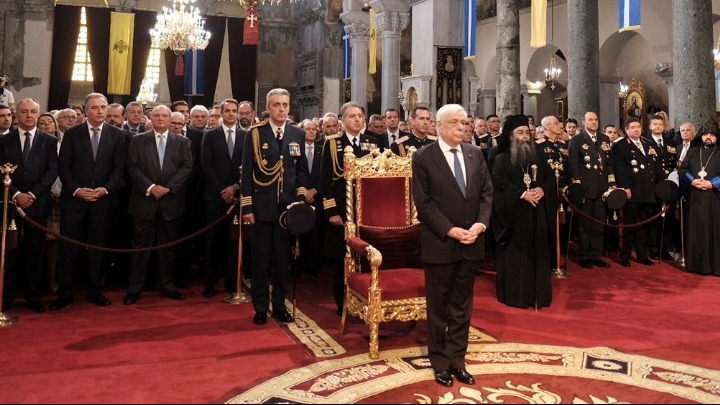 With a glorious doxology at the church of Saint Demetrios, Thessaloniki celebrated its 107th anniversary since the city’s liberation from the Ottoman Turks and the feast day of her patron Saint, Demetrios.
The liturgy was attended by the President of the Republic, Prokopios Pavlopoulos, PM Kyriakos Mitsotakis and scores of ministers and party representatives, among others.
“With confidence, honesty, seriousness, and plan we are moving steadily into a future that will be better for all Greek women and men,” PM Mitsotakis told reporters outside of the Church.
”We are shaking up the economy, shielding the Armed Forces, building our national alliances to face future with optimism and confidence,” Mitsotakis said.
On his behalf, President Pavlopoulos noted that ”Saint Demetrios, with his martyrdom, exemplifies how we, as a people and as a nation, must defend our national issues and our national rights against all.”
Thessaloniki holds three-day celebrations, that will culminate on Monday, October 28, with a massive military parade at the Alexander the Great avenue, marking the 79th anniversary of the ”OXI DAY,” Greece’s rejection of Italy’s demand to surrender to the Axis powers during World War II.