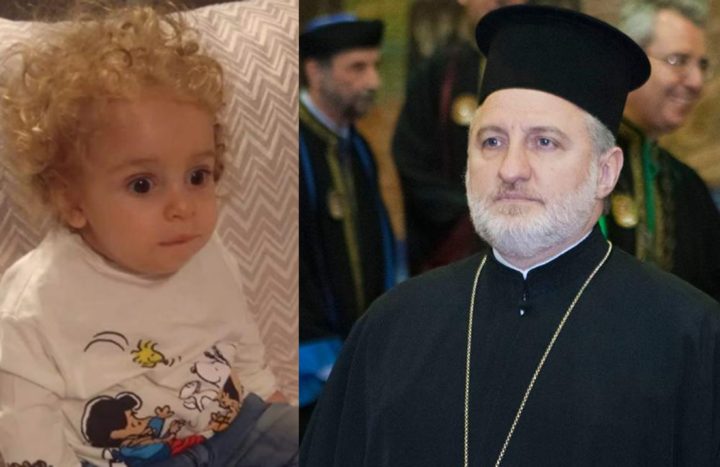 Archbishop of America Elpidophoros sent a letter on Friday to the family of Panagiotis Rafael Glossiotis, an 18-month old toddler who suffers from spinal muscular atrophy (SMA).
Panagiotis Rafael’s family is fighting a campaign to raise approximately 3 million euros to send the toddler to the United States, specifically Boston, Massachusetts, for treatment that is not yet available in any hospital in Europe.
Unfortunately, the national authorities that advise the Greek government on these issues have ruled that the state cannot cover the very high transportation and hospitalization costs, since the treatment offered in the US for this deadly decease is experimental and has yet to be proven effectual.
They have also said that the treatment may have severe side-effects, and this is the reason why it has not yet been endorsed by EU authorities.
In his letter, the Greek Orthodox Archbishop noted that the entire Greek community in the US is ready to assist the family so that Panagiotis Rafael can be transported to and hospitalized in Boston, where the treatment will be available to him.
”I put myself at the Greek Health Minister’s disposal and at the disposal of the Greek Government so that the whole matter can be dealt with effectively and promptly, with the help of our American flock.,” the Archbishop stayed.
Nearly two million euros have already been raised by the generous donations of Greeks around the world, as the family has been kindly asking for the assistance of everyone to give Panagiotis Rafael the chance to hope that his disease could one day be cured.
The parents have set up a GoFundMe campaign and a PayPal account for Panagiotis-Rafael’s treatment expenses.
For more information on the toddler’s medical journey and the ways in which you can assist him, please visit the family’s Facebook group here.

Convicted terrorist Dimitris Koufodinas, who has been on hunger strike for 45 days announced on Monday he will stop drinking water too.
Cyprus