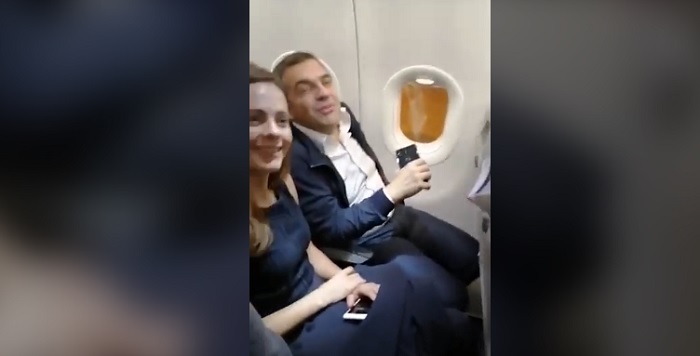 A Greek lawyer launched a verbal attack against former Prime Minister Alexis Tsipras over the Macedonia issue during a flight from Brussels to Athens on Thursday.
In a video uploaded on Facebook, Georgia Bitakou, who was among the organizers of rallies against the agreement between Greece and North Macedonia, is seen approaching Tsipras, who is seated next to his advisers.
She then begins to accuse him of disregard for the Greek constitution in the “selling out” of Macedonia.
Bitakou berated the former Prime Minister for once describing those who opposed the Prespa Agreement as “fascists,” and added her own reposte, saying “You are the worst fascist and traitor to your homeland.”
She also told Tsipras that he should be in jail for betraying Macedonia. “Unfortunately for the next three hours I will be travelling with a traitor,” Bitakou remarked in front of the former PM.
Tsipras maintained his composure throughout the incident, while his associates politely attempted to usher the woman away.
The majority of social media users in Greece, irrespective of their political views, condemned the woman’s angry outburst as staged and inappropriate.

Posted by Livemedianews.gr on Thursday, October 17, 2019