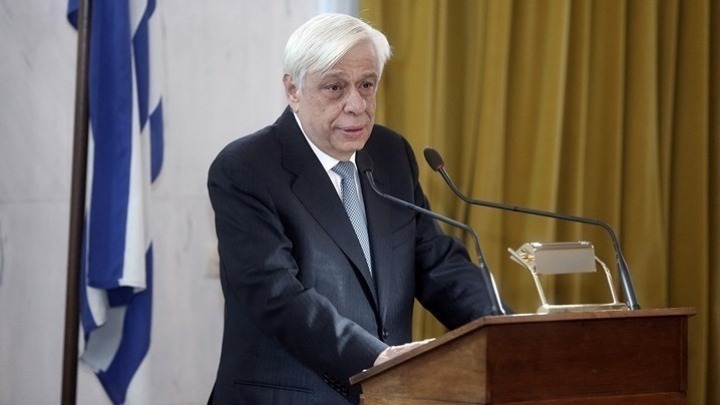 President of the Hellenic Republic Prokopis Pavlopoulos said on Sunday that Turkey’s military operations in northern Syria constitute “dangerous imperial fantasies” and warned that the EU will not tolerate violations of international law.
Speaking at the coastal town of Nafpaktos in a ceremony marking the anniversary of the historic naval battle of Lepanto, Pavlopoulos underlined that the EU will not tolerate Ankara’s arbitrary actions and the violations of international law which undermine peace and stability in the strife-torn Middle East.
Addressing the major powers, the president said that critical, international situations – such as that occurring at the present time – destroy democracy and marginalize people and fundamental human rights.
The EU, especially – due to its global role for the defense of the principles and values of peace, democracy, justice, and human rights – must be prepared to intervene at all times, promptly and efficiently, in order to ensure full respect of international and European law, he added.
The president said the current situation, which led to a fundamental pillar of Europe – its common foreign affairs and security policy – remaining inactive at a time when it should be demonstrating its true potential, was unacceptable for history, the future and the prospects of the EU.
He warned that Turkey’s “quaint” but also dangerous “imperial fantasies” will meet the appropriate response and also that they undermine any prospect of favorable developments in Turkey’s path to EU accession and its relations with the West, in general.
(Source: AMNA)

US Pivots, Distributing Vaccine According to Demand — Not Population