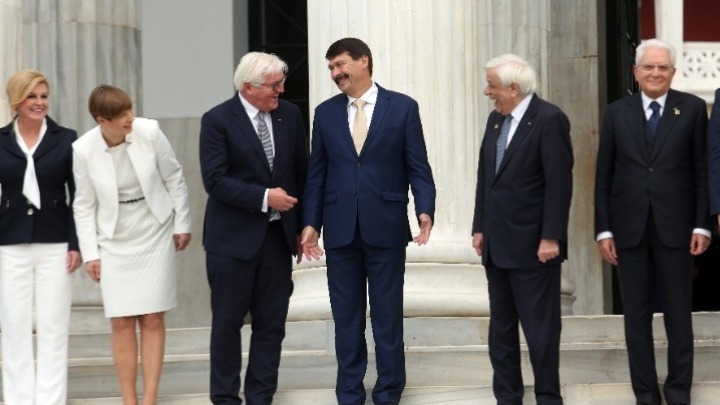 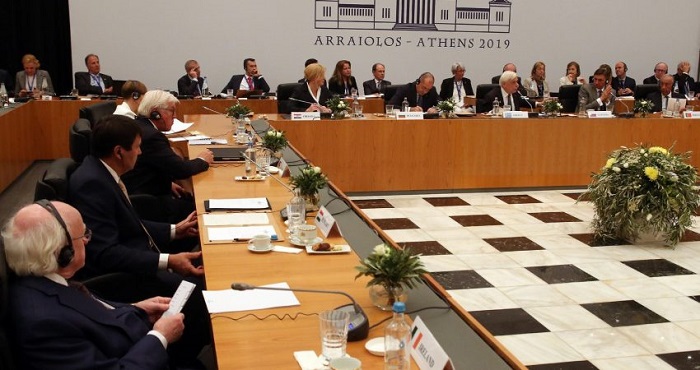 The full text of the Athens Declaration follows:
From Athens, the birthplace and beacon of European Democracy and European Civilisation, we, the Presidents of Bulgaria, Croatia, Estonia, Germany, Greece, Hungary, Ireland, Italy, Latvia, Malta, Poland, Portugal and Slovenia at our, now customary, annual meeting, repeat and update our “ call for Europe”, addressed on 9 May 2019, ahead of the 2019 European elections.
The results of the recent European elections send a positive message for the future of Europe, as they translated a clear pro-European spirit, based on the fundamental values and principles of the Union, since European citizens, to a large extent, decided to rely upon forces that support the European construction. Nonetheless, it is our duty to continue and intensify our collective effort to defend European Unification and European Integration based on shared values and, guided by the following considerations:
European Integration contributes to the attainment of a centuries-old hope for peace in Europe, following the barbarity of two World Wars sourced in the collision of imperialist ambitions and other extremist ideologies. Even today, we cannot and should not take Peace, Freedom and Prosperity for granted. There is an imperative need for all of us to work actively together in order to promote the great ideal of a peaceful and unified Europe.
The Peoples of Europe have united, out of their own free will, in order to form the European Union, which is based on the principles of Freedom, Equality, Solidarity, Democracy, Justice and Trust within and among its Members. A Union without precedent in the history of Europe.
For many people in Europe, especially among the Young Generation, European citizenship has become second nature. There is no contradiction in loving one’s village, one’s city, one’s region or one’s Nation and, at the same time, being a committed European.
During the last months, more than ever, the European Union is facing grave challenges. It is the first time, since the inception of the European Integration project, that some voices are now speaking of the reversal of one or several steps of integration, such as the free movement of persons or the abolition of common institutions. It is the first time that a Member State expresses its will to leave the European Union. At the same time, other voices suggest the strengthening of integration in the EU or in the Eurozone or advocate a multi-speed Europe.
Views on these issues may differ among Citizens and Governments of Member States, as well as among us, the Heads of State. Nevertheless, we all agree that European integration and unity are necessary and that we wish to promote Europe as a Union. Only a strong Community working together is able to face the global challenges of our time. The effects of climate change, terrorism, economic globalisation and migration do not stop at national borders, nor does an appropriate response. We will only manage to face these challenges successfully and to continue our path towards economic and social integration and development if we work together, as equal Partners, on an institutional level.
We therefore need a strong, inclusive European Union, a Union with common and shared institutions, a Union which constantly evaluates its work critically and has the ability to reform itself, a Union based upon its Citizens and its Member States, as its vital foundations.
This Europe needs a dynamic political debate on the best way forward, starting from the Rome Declaration of 25 March 2017. Europe is in a position to accommodate a broad variety of diverse opinions and innovative ideas. The return to a Europe where countries are no longer equal partners but rivals should be resisted as a regression to narrow competing interests inimical to a shared, sustainable future on a fragile planet. This year’s meeting in Athens, as well as our future meetings, the next of which is to be held in Lisbon in October 2020, are dedicated to the deepening, widening and enrichment of this debate.