Greece's Historical Ermis Cafe, in Operation on Lesvos Since 1800 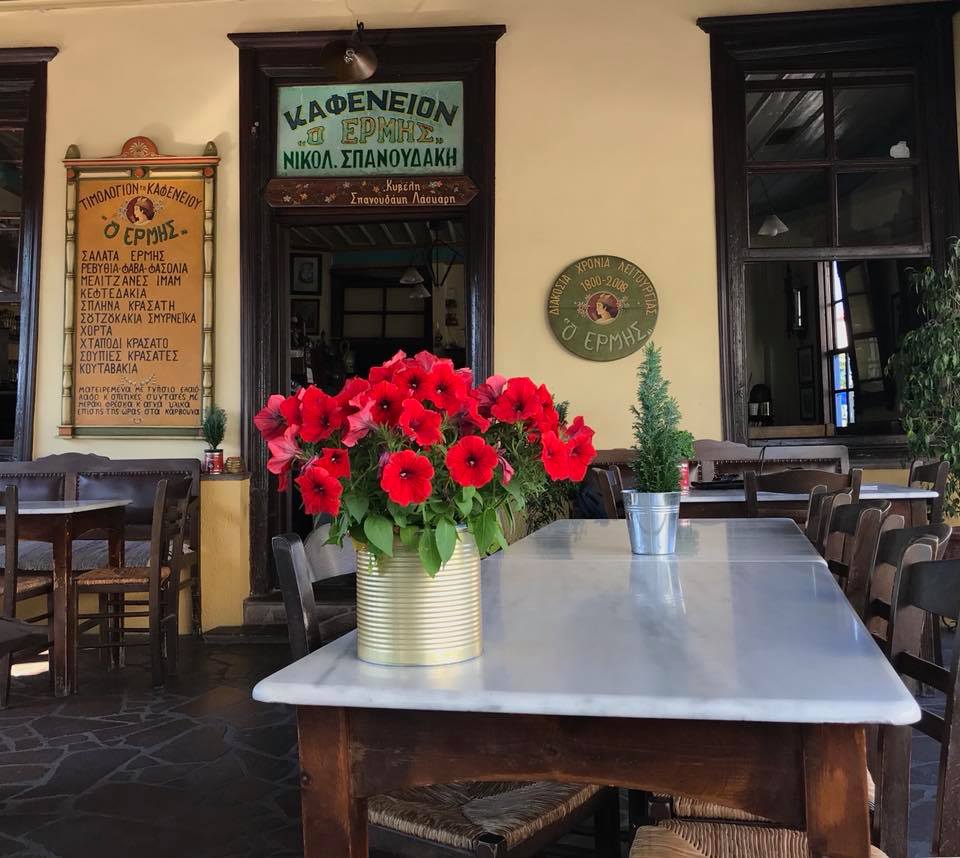 “Ermis,” the oldest cafe in Greece, which has been in operation since the year 1800 in Mytilene, the capital of Lesvos Island, has recently been included in the European Historic Cafes Association.
Historic cafes are important points of reference in any European city or town. Some of them have been operating for over a century, while others have been housed in historic buildings for even longer than that.
Places having a unique symbolism, coffee shops have throughout the centuries been the scene of important events and hosted important personalities in the literary, artistic and political worlds. Scores of luminaries have left their indelible imprint in them and have influenced the history of each establishment.
Long a rendezvous for writers, poets, actors, aristocrats, politicians, and intellectuals, as well as more ordinary folk from all walks of life, European cafes are in some ways the “guardians” of the innumerable unique stories that have taken place inside them, and have enormous cultural value.

One of these, without a doubt, is Ermis, one of the most striking examples of historic cafes in Greece, which in many ways is a veritable museum which reflects the long and vivid history of Lesvos’ capital.
The oldest cafe in Greece, the Ermis is believed to have opened in 1800, when the island, and most of the entire country, was still under Ottoman rule.
Very little was written down regarding its opening, but locals know from oral histories passed down through the generations that it has operated continuously since 1800 and was purchased by Greeks in 1922.
Georgios Spanoudakis migrated to Lesvos in 1922, fleeing from Aliaga after the Asia Minor Catastrophe and the systematic persecution of Greeks by the Turks. Spanoudakis and his brother had owned two traditional coffee shops in Aliaga, one which catered to younger customers and another one for older patrons. 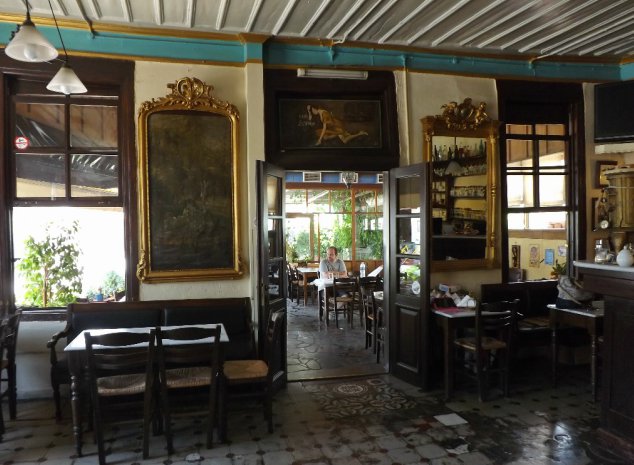 Once in Mytilene, Spanoudakis was able to buy the local Turkish coffee shop — which already had 120 years of history behind it — as a type of bank exchange for the two that he had previously owned in Aliaga.
The entrepreneur initially operated the establishment as a “club-cafe.” Customers were offered only the items listed on the old price list, written in both Greek and Arabic.
Amazingly, the Cafe’s menus have survived to this day, and they show a range of teas, coffees and other beverages — as well as hookahs — on a list of nearly fifty items from which to choose.
Located in the old market area, along Ermou Street, the cafe was frequented by people from all walks of life, from impoverished workers to the very mayor of Mytilene himself. Proving to be very popular from the beginning, it also admitted women, which was completely unheard-of for a coffee shop in the old days. 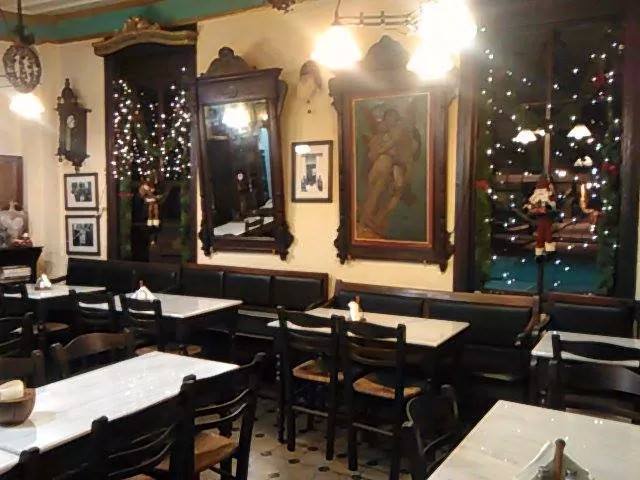 The Ermis was beautifully decorated and it had a great ambience all its own, as it continues to do today. Marble-topped tables, carved wooden sofas, and a selection of hookahs are shown in all the old photographs of the establishment.
Its luxurious curtains were velvet, and large mirrors with heavy gold frames and paintings hung on the walls, all of great value.
Some of the decor has survived, and continues to adorn the Ermis today. The original wooden ceiling and the ceramic tiles on the floor are practically intact. Most of the items which have survived over the years originally came from Asia Minor, and were installed by the Spanoudakis family.
The Ermis has continued to be in the proud ownership of four generations of the Spanoudakis family. Today, its owner is Eirini Laskari, the great-granddaughter of Georgios Spanoudakis.
She continues her long family tradition, offering many of the same dishes her great-grandmother prepared long ago. Traditional Greek fare such as soutzoukakia smyrneika, keftedakia, beans, imam baildi, octopus and squid, is featured on the menu.
The historic cafe is listed in most tourist guides now, not only for its long and storied history, but also for its delicious traditional Greek food.
Now, with its inclusion into the European Historic Cafes Association, it may perhaps attract a new following, as it deserves to, with its unique legacy and place in Greek history. 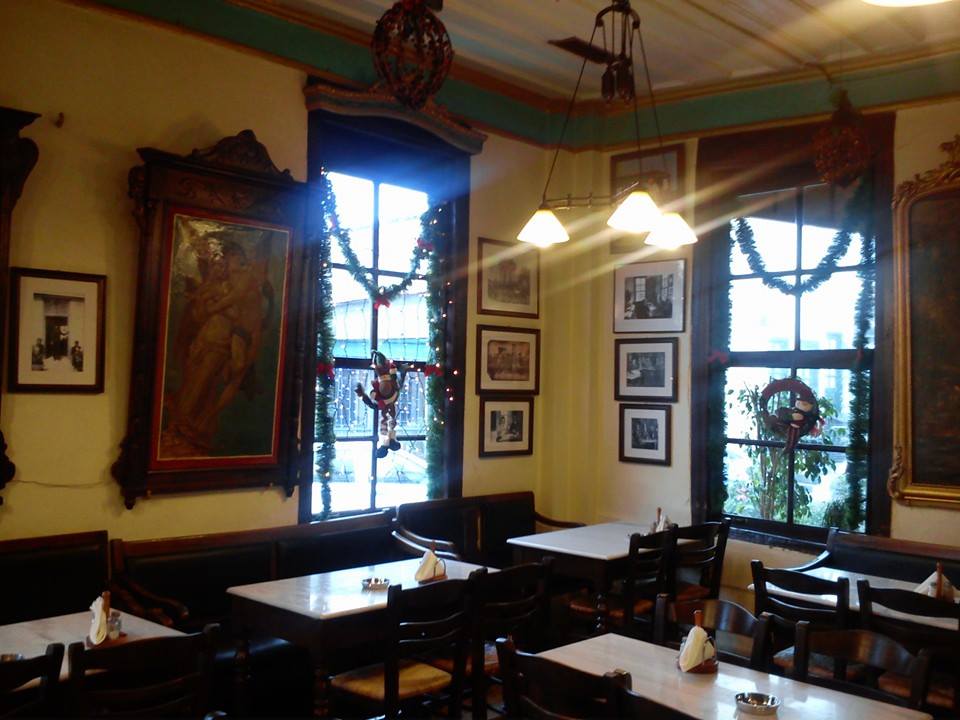