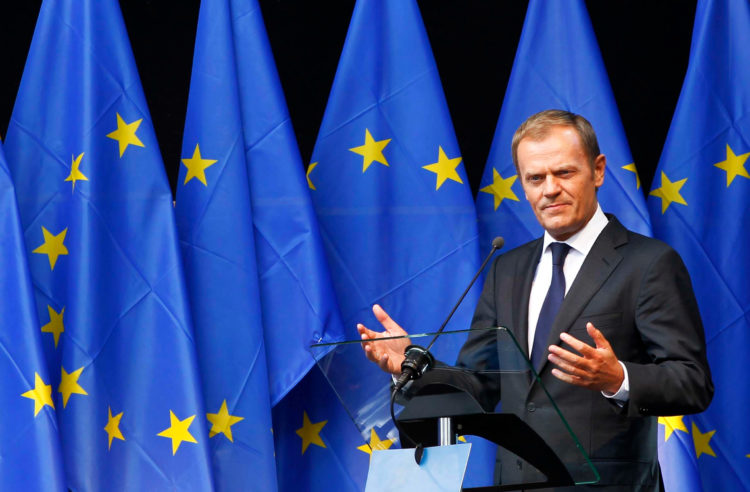 Donald Tusk, the outgoing President of the European Council, issued a damning statement against Turkey on Monday evening, condemning Ankara’s actions off the coast of the Republic of Cyprus.
Tusk, whose tenure in the EU’s highest office ends on October 31, described Turkey’s actions inside Cyprus’ Exclusive Economic Zone (EEZ) as illegal.
”Turkey’s continued illegal drilling activities only undermine good neighbourly relations between the EU and Turkey,” Tusk stated.
The EU President said that he is in constant contact with the President of the Republic of Cyprus, in order to be informed and coordinate Brussels’ and Nicosia’s actions against the aggressive behavior of the Turks.
”The EU stands united behind Cyprus,” President Tusk declared.

I am in permanent contact with President @AnastasiadesCY. Turkey's continued illegal drilling activities only undermine good neighbourly relations between the EU and Turkey. The EU stands united behind Cyprus.

Cypriot President Nicos Anastasiades thanked President Tusk for his support, noting that Turkey’s actions test the Cypriot and EU values of upholding international law and the need to abide by the principle of maintaining and promoting good neighborly relations.

These are the fundamental concepts that any state aspiring to become a member of our EU family should uphold and respect. We count on the support of all EU member-states during the EU Summit to take place next week in condemning these illegal actions.

Nicosia and Athens are ready to raise the issue of Turkey’s fresh provocations at the upcoming European Council Summit of October 17 and 18, proposing possible additional EU sanctions against Ankara.
However, the topic is not expected to be discussed in detail, as the Summit will be dominated by the many issues related to the ongoing Brexit crisis.