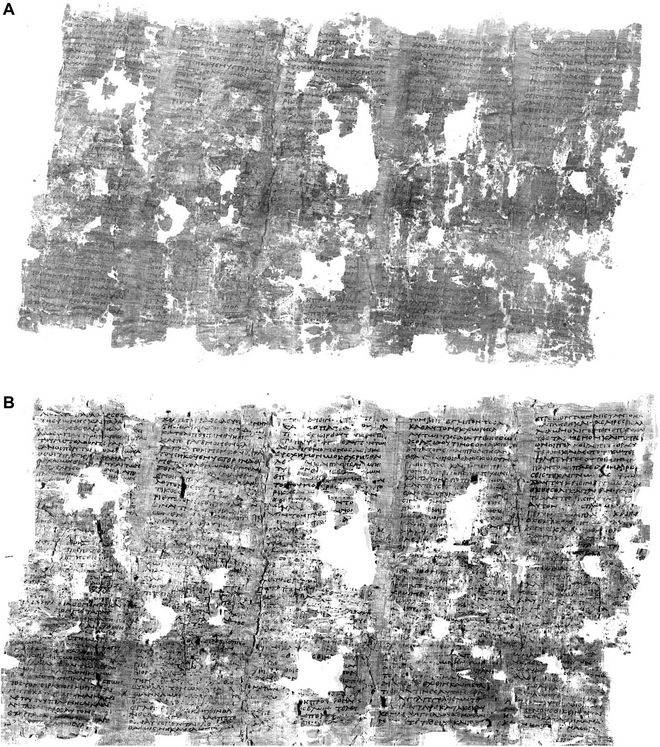 A group of European scientists has found a hidden ancient Greek text on the back of a papyrus that was burnt after the Vesuvius volcano eruption in 79 AD.

The scrolls – known as the Herculaneum papyri or Herculaneum scrolls — are more than 1,800 papyri found in the ancient Italian village Herculaneum in the 18th century. They were carbonized by the eruption of Mount Vesuvius.

Herculaneum was a resort during ancient times and it is often referred to as “the other Pompeii,” because it was buried in superheated pyroclastic material after the volcano eruption. It is also famous as one of the few ancient cities that can now be seen in almost its original splendor.

In the 18th century, a group of archaeologists uncovered a remarkable library scroll that had been carbonized. In the beginning, scientists attempted to unroll the burnt papyri, but because of their fragile state, many of them were destroyed.

Italian and other European scientists have, for the first time, using a high-tech non-invasive imaging method, managed to see fragments of ancient Greek text hidden behind the back of one of Herculaneum’s famous scrolls.

These papyri, many of which relate to works of Greek philosophers, were discovered in 1752-54 in archaeological excavations at the so-called “papyrus villa” in Herculaneum  (today Ercolano) in Campania, Italy. The villa was destroyed and buried in the ashes after the eruption of the nearby Vesuvius volcano in 79 AD.

Today, some 1,840 papyri are kept at the National Library of Naples and at the Institute of France in Paris. It is essentially the only ancient Greek-Roman library preserved in a small room of the Roman villa. They are the first Greek papyri found in archaeological excavations.

Following the eruption of the Mount Vesuvius volcano, a surge of hot air, reaching 320 degrees Celsius, burned the delicate papyri and left them in a state of extreme vulnerability. Up to now, scientists and archaeologists have tried to open them, but with disastrous or limited results.

However, with the use of advanced digital technology, researchers from Italy, France, Germany and Russia “announced that by using the ultrasound imaging technique in the short infrared portion of the electromagnetic spectrum (1,000 to 2,500 nanometers), they were able to” see “portions of Greek text hidden behind the PHerc. 1691/1021 papyrus.

This papyrus, the most famous of the collection, contains text from the “History of the Academy” (of Plato), which is part of a much larger work by the Epicurean philosopher Philodemus.

Reading through the new technology – which yields better results than the previous imaging at 950 nanometers – paves the way for something similar to other charred papyri of the same or other collection, which will greatly help experts on papyrus reading and restoration, on philology and ancient philosophy. Thanks to the new technique, the hidden text is even clearer than the one on the front, visible side.