Police Clash with Protesters Against Visit of U.S. State Secretary to Greece (video) 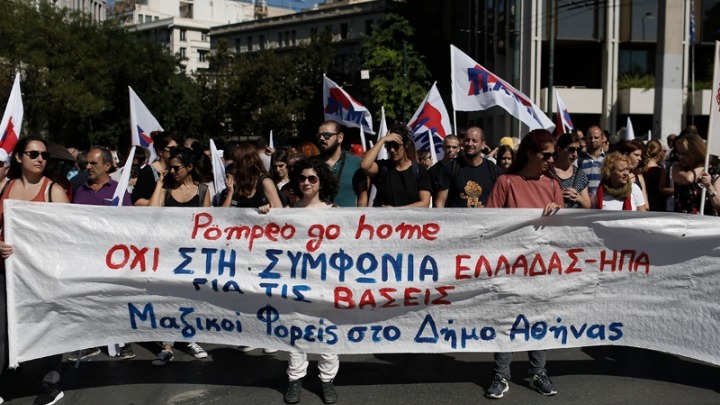 Police clashed with protesters during a rally against the visit of U.S. Secretary of State Mike Pompeo to Athens to sign the renewal of the United States-Greece Defense Cooperation Agreement on Saturday.
The rally started at Syntagma Square and protesters marched to the U.S. Embassy, where they set fire to U.S. and NATO flags, while shouting slogans against the U.S., NATO and Pompeo.
Earlier, a group of demonstrators threw paint at the Harry Truman statue on King Constantine Avenue. Police responded with tear gas and some demonstrators attacked the police. There was a minor clash between riot police and protesters, but no injuries or arrests were reported.
The main body of demonstrators belongs to the Greek Communist Party (KKE), while other leftist and anarchist groups participated in the rally.
Earlier, KKE Secretary General Dimitris Koutsoumbas made the following statement:
“The signing of the new agreement between Greece and the U.S, and the extension of the stay and expansion of U.S. military bases in Greece in particular, only cause even greater insecurity for the Greek people, will further destabilize the region, lead to an even greater Greek involvement in interventions, on missions overseas and in imperialist wars, and that’s why we shout a loud “No” to all of them today. We continue the struggle, we continue the resistance.”