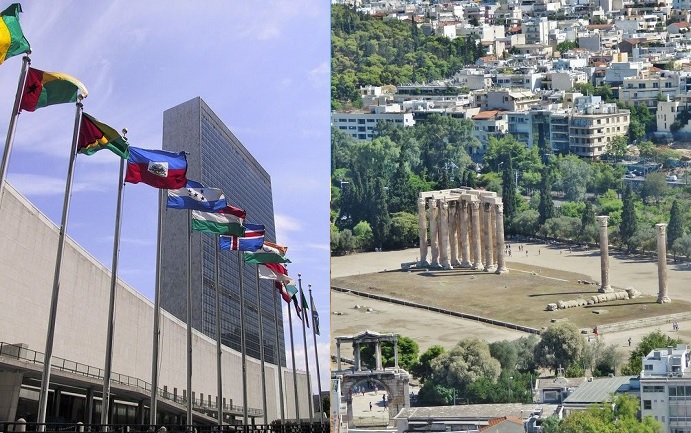 The UN can offer technical expertise and bring various organizations together in the fight to protect cultural heritage sites in Greece, Cyprus and elsewhere from climate change, a UN senior official said on Friday.

Speaking to the Greek Reporter, Satya Tripathi, UN Assistant Secretary General for the Environment noted that the Greek initiative on protecting our common cultural heritage, tabled at the UN climate summit earlier this week, will “get the highest respect and attention by the world organization.”

“Greece, Jordan, Turkey, Egypt are the cradles of modern civilization. They have tremendous cultural artifacts and without our culture we are nothing,” Tripathi said.

The Greek initiative, which has the support of the World Meteorological Organisation (WMO) and UNESCO, was among nine flagship proposals selected by U.N. Secretary General Antonio Guterres to be discussed at the climate summit.

The Greek proposal aims to take measures and create mechanisms to protect cultural and natural heritage by increasing its resilience and ability to adapt, and to promote research and education. It was the only Summit proposal that focused on protecting cultural heritage.

“The UN has a lot of technical expertise, in UNESCO and other entities that are working in this area. I think the great strength of the UN is building partnerships, building bridges and bringing people together. So, the UN can do a lot in helping to protect cultural heritage,” Tripathi said.

The UN official reserved judgement on the Greek proposal until he has seen details. He noted that the UN is an organization of member states.

“When the states identify a problem that requires attention they may decide to put in the resources to tackle it.

“But I see no reason why member states would not consider the protection of cultural heritage as a priority,” he added.

“With rising temperatures, sea levels and changing weather patterns our cultural heritage will be affected and we should do as much as we can, whether its governments or international organizations, such as UNESCO, to protect it,” Tripathi stressed.

The Indian UN senior official, who said that Greece is the “cradle of human civilization”, is an optimist.

He believes that the Climate Summit held in New York earlier this week has created a momentum for positive change.

“For too long we have been negotiating to do something about climate change, but not much has been happening.

“The Summit changed that, as the the Secretary General invited leaders that were prepared to promise and do something transformative for our climate– something that would move the needle on climate change, environmental protection, water scarcity and water quality,” he said.

“I think we can be hopeful about the future of our planet. Numerous world leaders came together with the private sector the civil society and NGO’s – this has created a momentum that we must capitalize upon and work with people that have promised to do something and make sure it happens, because the world desperately needs it,” Tripathi added.