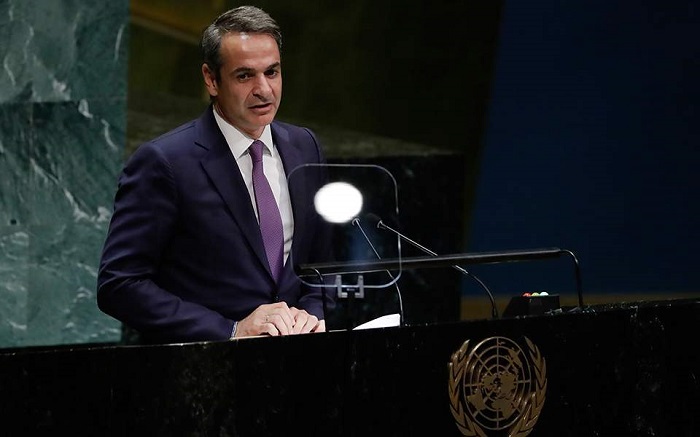 Prime Minister Kyriakos Mitsotakis said on Friday speaking at the UN General Assembly in New York that Greece entered a new chapter after his conservative government took power in July.

“A new chapter,” he said, “that will show what we are made of as a people and as a nation.”

He referred to Turkey’s illegal drilling in the Eastern Mediterranean, and in particular in the Exclusive Economic Zone and the territorial waters of Cyprus, which violates international law and severely undermines ongoing UN-led efforts to restart the Cyprus talks.

“Gun-boat diplomacy does not belong to the 21st century, but to the 19th,” the prime minister declared.

He also took note of  the recent Turkish actions and statements regarding the opening of the ghost city of Varosha under Turkish Cypriot administration, which he said “violate the Security Council’s relevant decisions.”

Mitsotakis reiterated his support of Cyprus as a bizonal and bicommunal federation with a single international legal representation and a single citizenship, and further stated that Greece is prepared to “repeat negotiations for the end of the 1960 System of Guarantees which is obsolete and outdated.”

He called for greater burden-sharing when it comes to immigration, in a thinly veiled criticism of the failure of some central and eastern European states to take in migrants.

“We are reaching the limits of our ability to tackle this problem,” Mitsotakis said.

“Greece cannot bear alone the burden of massive movements of people,” he said while speaking of a “European challenge that calls for European action.”

In his first speech at the General Assembly, Mitsotakis deplored the “xenophobic agendas” of certain European nations, which use the issue as a “weapon” for reasons of political expediency.

The Greek premier also urged Turkey to respect an agreement with the EU to stem irregular migration flows. He added that the bloc needs to move quickly to adopt new common rules for asylum seekers.

In wrapping up his address, Mitsotakis said that “we often criticise the UN, but it is the only bulwark we have, and the only beacon of hope” in resolving international conflicts.