By Nick Kampouris
September 27, 2019
Facebook
Twitter
WhatsApp
Linkedin
Email
The Greek Ministry of Culture announced on Thursday that a new storage room for valuables in Zominthos Palace, on the plateau of Mount Psiloritis on Crete, was discovered at the sprawling site during this year’s excavation season.
Supporting evidence for the Palace room being used as a type of archive includes its location and other circumstantial evidence.
Besides the multitude of vessels found throughout the site, discoveries included a hallway with pillars, leading to what could possibly be a throne room. The remains of a seat were found in that room, which was ostensibly used in earlier periods as well, from 1900 BC to Mycenaean times, ca. 1400 BC.

The remnants of clay pipes from a sophisticated drainage system were also discovered, along with an area of obsidian carvings, and another area by the north facade of the main building, which contained hundreds of clay vessels.
These vessels included rhyta, the characteristic Cretan vessels which were used in rituals.
According to research scientists, the entire area provides evidence of extensive metalworking, which was apparently carried out in workshops in the complex. 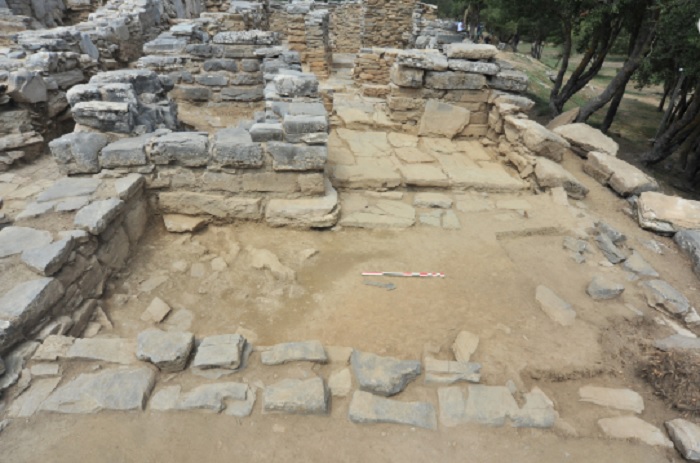 In addition, the Ministry said in its announcement that an earthquake in the Neopalatial era had led to extensive changes in the site, even including the creation of a ramp.
This season’s excavations were supervised by archaeologist Effie Sapouna Sakellaraki, who began excavating the area with her late husband Yiannis Sakellarakis.
This season’s archaeological results confirmed the existence of an even older building under the current complex, which was built in the Neopalatial period, from 1700-1600 BC.
“This year’s excavations focused on examining the area around the central palatial building and yielded a lot of new facts. A basic one is a confirmation that there was an older building under that of the Neopalatial period that was founded on the rock outcrop; it occupied a larger area and contained a major number of artifacts from this period,” the Ministry noted.
The palace of Zominthos was discovered in the early 1980s by Sakellarakis, who unearthed the large, multi-level Minoan palatial complex, which lies at an altitude slightly below 1,200 meters, or 3,937 feet.
With information from AMNA