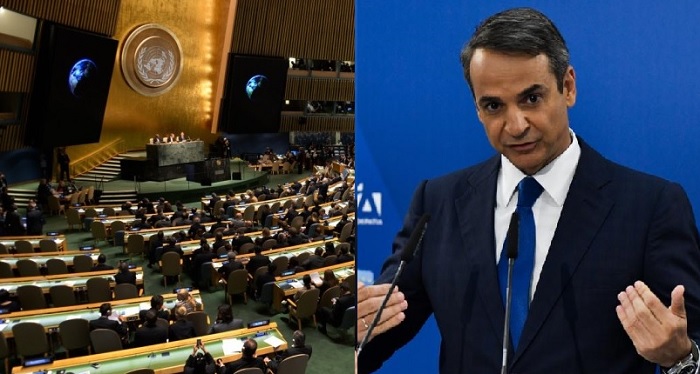 Prime Minister Kyriakos Mitsotakis will seek to rebrand Greece by launching a charm offensive during his presence this week at the UN Climate Summit and General Assembly in New York.
In scheduled meetings with world leaders, opinion makers and the business community, Mitsotakis aims to convince the world that Greece has become a “normal” European country which has left behind the era of bailouts.
He will also put forward a green agenda and the Greek initiative on the Impact of Climate Change. In his speech on Monday at the UN Climate Summit, he is expected to push the world body to take measures and create mechanisms to protect cultural and natural heritage, Greece is the only country that has included in its green agenda a focus on protecting cultural heritage.
Mitsotakis schedule in New York is as follows:
– On Monday, September 23, the Prime Minister will address the UN Climate Summit. On the same day, he will attend an event held by the Presidents of France, Colombia and Chile on the issue of deforestation following the Amazon fires.
– On Tuesday, September 24, he will attend the inauguration of the 74th UN General Assembly and will also attend the International Advisory Board meeting of the Atlantic Council. On the same day, Mitsotakis will attend a Goldman Sachs event in the presence of investors.
– On Wednesday, September 25, the Prime Minister will attend the Bloomberg Global Business Forum. Mitsotakis will also attend a lunch by US Secretary of Commerce Wilbur Ross in the presence of investors. On the same evening, he will deliver a speech at an event hosted by expatriate Greek organizations in Astoria, NY.
– On Thursday, September 26, the Prime Minister will meet with UN Secretary-General Antonio Guterres and will be the keynote speaker at a Council on Foreign Relations event.
-On Friday, September 27, the Prime Minister will address the plenary of the 74th UN General Assembly.
During his visit he has scheduled several bilateral meetings with world leaders:
He is due to meet US President Donald Trump (24/9), Turkish President Recep Tayyip Erdogan (25/9), Australian Prime Minister Scott Morrison (24/9) and India’s Prime Minister Narendra Modi (26/9).
Mitsotakis will also meet with Prime Minister of Albania Edi Rama (23/9) and Prime Minister of North Macedonia Zoran Zaev (24/9), as well as with Serbian President Aleksandar Vucic (23/9), President of Kosovo Hashim Thaci (23/9) ) and the President of Georgia Salome Zourabichvili (24/9).
The Prime Minister’s bilateral contacts with President of Colombia Ivan Duque Marquez (23/9), Palestinian Authority President Mahmoud Abbas (23/9) and Armenian Prime Minister Nikol Pashinyan (24/9) are also scheduled.
It is noted that, as already agreed, PM Mitsotakis will meet with the President of the Republic of Cyprus Nikos Anastasiades (26/9). On the same day, he will meet with representatives of Jewish organizations, the Archbishop of America Elpidoforos and expatriate Greek organizations.