GRNews
GreekReporter.comGreek NewsDiplomacyUS Ambassador Warns of the "Malign" Influence of Russia and China in... 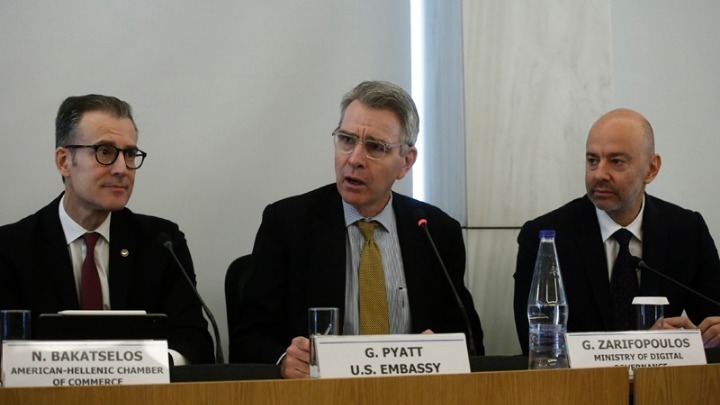 US Ambassador to Greece Geoffrey Pyatt sent a clear warning on Monday regarding the “malign” influence of Russia and China in Greece.
Addressing a conference on energy developments in the Eastern Mediterranean, co-organized by the Hellenic Foundation for European and Foreign Policy (ELIAMEP) and the Institute of International Relations of the American College in Greece, Pyatt said that the US is “working with other democratic partners in the region to push back on malign actors like Russia and China, who we believe hold different interests.”
“We recognize that the privatization of Piraeus went to China. The privatization of the Thessaloniki Port went to Russian-aligned interests. We hope very much that the Alexandroupolis privatization will be structured in a way which is attractive either to an American investor or a European investor. We see this as connected to the larger geopolitical story here,” Pyatt stated.
The US Ambassador stressed that the US is expected to be a decisive factor in transforming the energy landscape in Greece and in the Eastern Mediterranean region as a whole.
He noted that in the last three years, the promotion of energy issues has been at the top of the agenda of US–Greek bilateral relations.
“One of the things that has changed most dramatically in our agenda with Greece over my three years here has been the prominence of energy issues in our bilateral relationship, but also the progress that we’ve achieved across a broad range of issues,” Pyatt noted.
He listed as the most prominent issues “the inauguration of the Revithoussa Terminal; the completion of the TAP Pipeline; the inauguration of the IGB Pipeline; the commencement of U.S. LNG exports to Greece, which have become a sort of ‘new normal’ now; and the rapid transformation of the role of private importers in the Greek energy market.”
A full transcript of Pyatt’s remarks at the ELIAMEP conference can be found by clicking on the link here.