The Delphi Bank Greek Film Festival has announced their program for this year, which is the 26th time the important film event will be held in Sydney. The Festival offers the opportunity for film lovers and philhellenes to enjoy the best films to come out of Greece in the past several years.

It also presents diverse stories made by Greek filmmakers who make their movies in other countries all over the globe.

The Festival’s program this year includes three documentaries, one Australian short film, and fifteen features, which will be shown beginning on the 8th of October. The Festival will run until the 20th of October. All films will screen at Leichhardt’s Palace Norton Street Cinema, and tickets are available by visiting the website for the Festival here.

“From the inspirational, to the thought-provoking, and the downright hilarious, this year’s program showcases an incredible selection of diverse tales that are guaranteed to resonate with Australian audiences,” says Nia Karteris,  the chair of this year’s Greek Film Festival.

The Festival will open with award-winning Greek filmmaker Tassos Boulmetis’ sports docudrama titled “1968.” This spellbinding film recounts the stunning victory of Greece’s AEK team over the Czechoslovakians in basketball’s European Cup. Greece unexpectedly triumphed over the mighty Czech team, which had until then been seen as unconquerable.

Greece’s first-ever win in this tournament, which took place on April 4, 1968, saw more than 100,000 people ecstatically flooding the court and the environs of Athens’ Panathenaic Stadium.

The Festival will close with “The Taverna,” a black comedy directed by Australian Alkinos Tsilimidos. The film, set in Melbourne, records a chaotic night where a belly dance at a Greek restaurant leads to hilarious and unexpected consequences.

1968 (2018) – The docudrama revisits the legendary victory of the Greek basketball team AEK in the European Cup against the seemingly-undefeatable Czechoslovakian team.

Aigaio SOS (2018) – A small island which suddenly emerges from the sea between Turkey and Greece by the force of an earthquake, causes an escalation of tensions between the two countries. Greeks and Turks both rush to conquer the tiny islet, but since none of the countries want to ruin the beautiful summer, both sides leave each other alone to enjoy the island.

Epiphany (2019) – This film, set in a Greek town in Florida, follows the story of a young girl named Luka who is desperate to connect with her father who neglects her.

Her Job (2018) – This drama explores how an ordinary housewife obtains a job as a cleaner and gains personal empowerment through her employment during the Greek financial crisis. She unexpectedly spends the happiest time of her life during those days, while she gains financial independence inside an economic system of exploitation and ruthless competition. 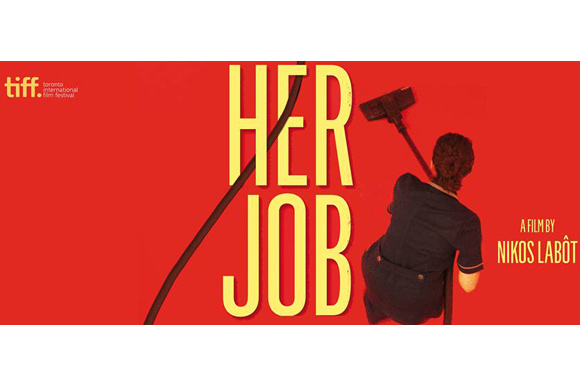 Holy Boom (2018) – A dramatic film featuring multiple storylines, this movie takes place in an immigrant district of Athens during Orthodox Easter. The lives of four strangers change dramatically after a mail-box explosion takes place there.

In This Land Nobody Knew How To Cry (2018) – This comedy follows a research group which discovers a lost Aegean island whose inhabitants are living their own carefree money-less lifestyle in complete and utter happiness.

Love Me Not (2017) – In this dramatic thriller, a wealthy couple hires a young woman to be their surrogate mother. The woman and the younger girl begin to bond, and enjoy their surrogate experience. However, not everything is as it seems.

Meltem (2019) – A young Frenchwoman of Greek origin returns to her holiday home on the island of Lesvos with her friends. However, their plans become derailed when they meet a young Syrian refugee who was separated from her mother.

Pause (2018)- Trapped in the misery of an oppressive marriage, a woman finds refuge in a fantasy world of violent rebellion against her sexist husband. Soon, reality and fantasy start to blur.

Perfect Strangers (2016) – The film Perfect Strangers chronicles an ill-fated dinner which goes awry when friends make the fateful decision to make all of their texts and calls public. Many secrets are revealed — and friendships are damaged.

Perimenontas ti Nona (2019) – In this light-hearted comedy, best friends Alexandros and Hercules arrive to the island of Naxos to visit Hercules’ sick grandmother. On the island they meet a pair of strangers who uncover the real truth about Alexandros’ identity.

The Bachelor 3 (2018) – A Hellenic take on “The Hangover” franchise, The Bachelor 3 reunites the cast of the massively-popular 2016 original and the 2018 sequel for another night of madness.

The Bullet Within (2018) – A 35-year-old son buries his 27-year-old father. This true story takes place one day before the son’s wedding in today’s divided Cyprus. The 35-year-old struggles with the absence of his father, who had been missing since the war — but his father might be closer than he thinks.

The Favourite (2018) – In early 18th century England, Queen Anne occupies the throne and her close friend, Lady Sarah, governs the country in her place. When a new servant, Abigail, arrives, her charm endears her to Sarah.

The Taverna (2019) – This film, set in Melbourne, records a chaotic night, where a belly dance at a Greek restaurant leads to hilarious and unexpected results.

Utopia (2019) – This story is about a man who returns to his country only to find a society where cars and homes have cameras which fine their occupants; smoking and alcohol is illegal; citizens fine each other for the smallest offense with their mobile phones and anyone with debts or a mortgage cannot travel outside the country. Sound familiar?

Maria by Callas (2017) – The first film to tell the life story of the legendary Greek-American opera singer Maria Callas completely in her own words. Through television interviews, family photographs, performances, memoirs and private letters, the film explores the life of one of the greatest singers of all time.

The Return (2017) – Placed in a facility for young offenders, the inmates struggle to overcome the many limitations of a “correctional” institution.

When Tomatoes Met Wagner (2019) – A documentary about a community trying to survive austerity in their small Greek village by marketing their organic tomato products as trendy delicacies.

We're giving you a glimpse of our 2019 programme ahead of our full announcement on Tuesday 10 September. Feast your eyes on the trailer for the Delphi Bank 26th Greek Film Festival now!www.greekfilmfestival.com.au